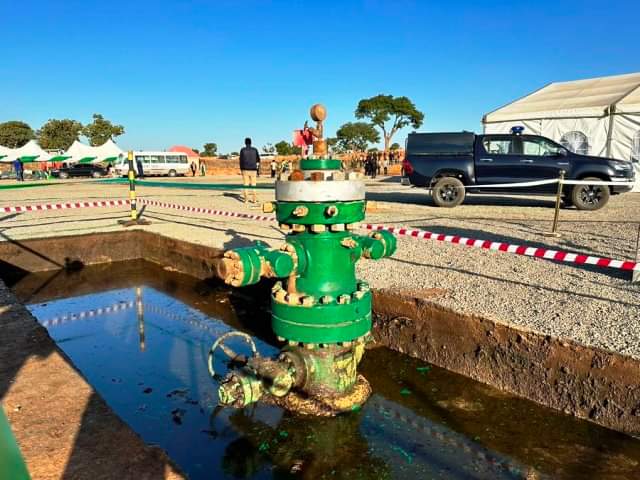 A crisis appears to be brewing over the ownership of the Kolmani Oil and Gas field as both Bauchi and Gombe States have started laying claims to the oil wells.

Officials and residents of the two states have also accused each other of attempting to appropriate the site which is said to contain one billion barrels of crude oil reserves and 500 billion standard cubic feet of gas.

Kolmani in North-East Nigeria reportedly has oil in commercial quantities with Oil Prospecting Licences 809 and 810, cutting across Kolmani One, Two, Three, Four and Five.

Speaking during the event, Buhari disclosed that the project has attracted over $3bn investments so far.

The president said, “We are pleased with the current discovery of over 1b barrels of oil reserves and 500 billion Cubic Feet of Gas within the Kolmani area and the huge potential for more deposits as we intensify exploration efforts.’’

“It is, therefore, to the credit of this administration that at a time when there is near zero appetite for investment in fossil energy, coupled with the location challenges, we are able to attract investment of over $3bn to this project,” he added.

Buhari noted that the governors of Bauchi and Gombe states had given assurances of their unwavering commitment and willingness to ensure support and cooperation in the localities.

However, the governors’ assurances seemed to have been forgotten as the two states declared that they were the rightful owners of the oil-rich field.

While insisting on Gombe’s ownership of the contentious Kolmani field, the Special Adviser to Gombe State Governor on Information Management and Strategy, Alhaji Ahmed Gara-Gombe, blamed the boundary commission for the controversy.

He stated, “The truth of the matter is that the Kolmani oil well is in Gombe State; Akko Local Government, Pindiga emirate, Tai district, Kaltanga Mamuda ward. It has nothing to do with Bauchi State or Alkaleri Local Government.

“If putting the records straight is what is seen as a crisis, so be it. The National Boundary Commission, the NNPC are hypocrites in this matter, they know the truth and they should come out clean.”

According to Gara-Gombe, the solution is to give Gombe what belongs to it, adding, “Kolmani One is in Bauchi State in Alkeleri, let them go and explore that one. Four oil wells are in Gombe.’’

He noted, ‘’Again, we need an independent jury to determine and verify our claims. Our people whose land was dubiously taken in the name of access road and were paid between N64,000 to N117,000 as compensation by the NNPC must be paid appropriately.

Echoing the governor’s aide, a lawyer, Abdullahi Inuwa, blamed a former Group Managing Director of the NNPC who passed on recently, for awarding the land to Bauchi State.

The late NNPC GMD was reportedly an indigene of Misau, Bauchi State.

Inuwa explained that their grouse was not with the Federal Government but the NNPC, noting that the president was misguided on the true owners of the land.

‘’The Federal Government or the President has been misled by the NNPC especially the highest ranking officers of the NNPC that are of Bauchi State origin,” Inuwa further alleged.

He declined to speak further on how the late NNPC GMD allegedly caused the brewing feud, but simply claimed that the NNPC had shown preference for Bauchi State.

‘’And not only that, if you are to go to Barambu during the late NNPC GMD’s administration, I was informed about a store constructed by the NNPC in Barambu, which is part of Bauchi and I was told there is a laboratory there.

“If they had treated us fairly whether Kolmani is in Bauchi or Gombe, we would just remain mute, we would not say anything. As time goes on, the way and manner they are treating us as if we don’t know what we are doing is what provoked us to come out and voice out our grievances and also tell the world that this is our position; that we are not ready to relinquish Kolmani which is in the process of annexation from the side of Bauchi through the NNPC.”

Inuwa gave the assurance that the contention would not degenerate into violence, noting that they were ready for dialogue.

He said, “We have heard about the challenges in the Niger Delta but sadly in this case it is the government through the NNPC’s selfish interest that is trying to create problems and disharmony.

‘’Some of us have parents who hailed from the other side, Bauchi side; we go to their market, they come to our market. We inter-marry, we are one. NNPC’s senior officers should remember the oath of allegiance; they are first from Nigeria before considering themselves as indigenes of Bauchi.’’

Speaking further, he stated, “I don’t think it will escalate to the Niger Delta extent. From the outset, if someone like the late NNPC GMD had engaged both communities from both sides of the boundary, it wouldn’t have escalated. Our doors are not closed for dialogue, I believe our leaders will resolve it amicably.’’

A resident of Pindiga, Gombe State, Salisu Mohammed, said they would not allow themselves to be moved to Bauchi, adding that oil discovery should not be a reason to lose one’s origin.

He said, “We are casting our votes with respect to the state Assembly of Gombe and not Bauchi House of Assembly. We are not ready to be snatched because of oil to a different state.”

Speaking to our correspondent on the telephone, the Commissioner for Information, Bauchi State, Yakubu Ningi, said that the state government would consult widely before making its position on the matter known to the public.

He said, “Although the governor has been invited to speak on the matter on a television programme, he did not go because he realised that the matter is taking a different dimension.

“He wants to have wider consultations after which the Bauchi State government’s position on the matter will be made public. His Excellency said you’ll need to give us some time to articulate our position before going to press later on.”

Reacting to Gombe’s claims over the oil field, Muhammad Bako, the member representing Pali Constituency in the Bauchi State House of Assembly where the area is situated, stressed that the area belonged to Bauchi.

He added, “This issue is not an issue for the youths because when you bring in the youths, the issue has become a child’s play. They are being sponsored by people and they don’t know exactly where the boundary is.

“The chairman of the National Boundary Commission hails from Gombe State, but when the issue of verifying the boundary came up, he went and saw it (the boundary); they were thinking the boundary was in Gombe.

“But when they saw it, they left and never returned because they saw the truth that the oil was in Bauchi and not in Gombe. And you know when people want to cause problems or crisis, they use the youths but I am calling on them not to cause trouble that will consume them. They are being sponsored by people who don’t know anything about this oil.”

Going down memory lane, the lawmaker said that the oil was first discovered when Abubakar Tafawa Balewa was a minister.

Bako argued, “This oil was first discovered when Abubakar Tafawa Balewa was the minister of works; that was when the history of this oil started. Then, during the regime of the late General Sani Abacha, he started drilling the oil at Barumbu and then he died.

“When Olusegun Obasanjo came in, he allegedly sent (messages) and the oil well was reportedly blocked, and the issue was no longer talked about. So, when Buhari came, he started the drilling again.’’

“The one (oil well) in Barumbu was just flushed. And then, two new ones were drilled. The one that was flushed in Barumbu and the two new ones are not in Gombe. The boundary between Bauchi and Gombe and these oil wells is up to 20 kilometers,” he stated.

To buttress his argument that the area belongs to Bauchi, the lawmaker said all the communities in the jurisdiction were paying taxes to the state government.

“So, if a traditional ruler dies in any of those communities, would a new one be installed by Gombe State? He will be installed by Bauchi State government, and not Gombe. And because of that, they have no excuse.”

The lawmaker sued for peace, admonishing the people of the area not to encourage militancy over the oil discovery.

Reacting to Bako’s claims, the media aide to Gombe governor, Gara-Gombe, simply stated, “Does it mean that the chairman of the National Boundary Commission who is from there, who is their son, has rejected his home state and is now supporting Bauchi? Do they love Gombe more than he does? You need to ask him to give you an answer.”

Commenting on the controversy, Deputy Director, National Boundary Commission, Mr Emmanuel Bulus, said the agency was not aware of the contention over the oil field.

When asked if the NBC would address the tussle, he said only the director-general of the commission, Adamu Adaji, could speak on the matter, adding that he was out of Abuja at the moment.

On his part, the Group General Manager, Group Public Affairs Division, NNPC, Garba-Deen Muhammad, said attention should rather be focused on oil production from the wells at the moment.

“Let us worry more about oil supply for now. This one (ownership tussle) can wait,” he stated.