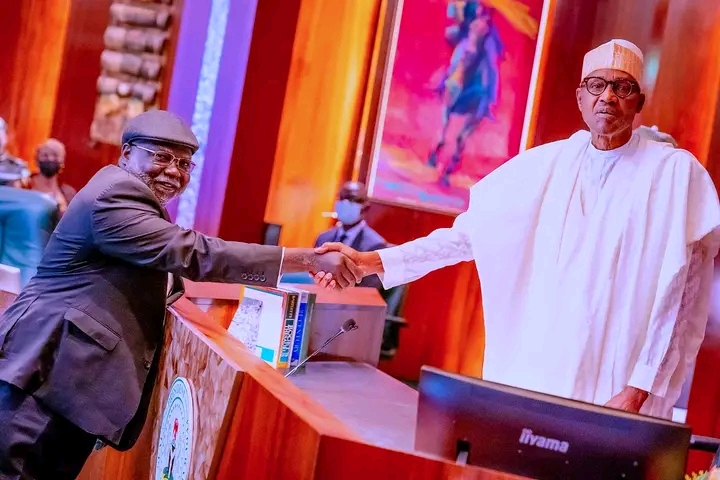 Justice Olukayode Ariwoola of the Supreme Court on Monday took the judicial oath of office as the acting Chief Justice of Nigeria (CJN).

President Muhammadu Buhari administered the oath of office to Justice Ariwoola during a swearing-in ceremony held at the Council Chamber of the Presidential Villa in Abuja, the nation’s capital.

Ariwoola, 62, takes over from the outgone CJN, justice Tanko Muhammad, is expected to serve in an acting capacity till further confirmation by the National Judicial Council (NJC).

While taking the judicial oath, he swore to be faithful and bear true allegiance to the Federal Government of Nigeria, as well as defend the Constitution of the Federal Republic of Nigeria.

Justice Muhammad had resigned as the Chief Justice of Nigeria on Sunday night, citing ill-health as the reason for his decision.

This led to the inauguration of Justice Ariwoola – the next most senior justice of the Supreme Court at the time of Justice Muhammad’s resignation.

Until his resignation, according to reports, the immediate past CJN was seriously ill.

News of his resignation broke barely a week after 14 justices of the Supreme Court wrote to him to lament the dilapidated state of affairs in the apex court.

In the leaked letter, the justices alleged that Justice Muhammad failed to address the issues raised despite drawing his attention to them.

They had complained of a lack of residential accommodation and vehicles at the court, alleging that the former CJN was gallivanting with his ‘spouse, children and personal staff’ while not allowing them to travel with an assistant on foreign trips.

But these allegations were denied by an aide to the former CJN.

As President Muhammadu Buhari has sworn in Justice Olukayode Ariwoola as the acting Chief Justice of Nigeria, CJN.

Ariwoola was sworn in on Monday at the Council Chambers in Abuja.

He took over from the immediate past CJN, Ibrahim Tanko Muhammad who resigned on Monday.

Justice Ariwoola is currently the most senior Justice of the Supreme Court.

He was formerly a Justice of the Court of Appeal and was elevated to the Supreme Court bench following his transfer from the State High Court of Oyo State.

Ariwoola started his educational career in his home town Iseyin at the Local Authority Demonstration School, Oluwole, in the Iseyin Local Government Area of Oyo State between 1959 and 1967.

There have been several reports that he resigned on the grounds of ill health but the sources said it wasn’t a voluntary action as he was forced to leave office.

“The CJN was forced to resign, He didn’t voluntarily resign. He was unaware when he got to the office this morning that he would be leaving.

“He was expected to declare open a workshop this morning at the NJI (National Judicial Institute). He was preparing for the conference when he read it somewhere that he has resigned.

“The Presidency cabal waited to boot him out after Mary Odili retired. It is part of their plans for litigation ahead of 2023 elections,” one of the sources told Hotmedia.ng.