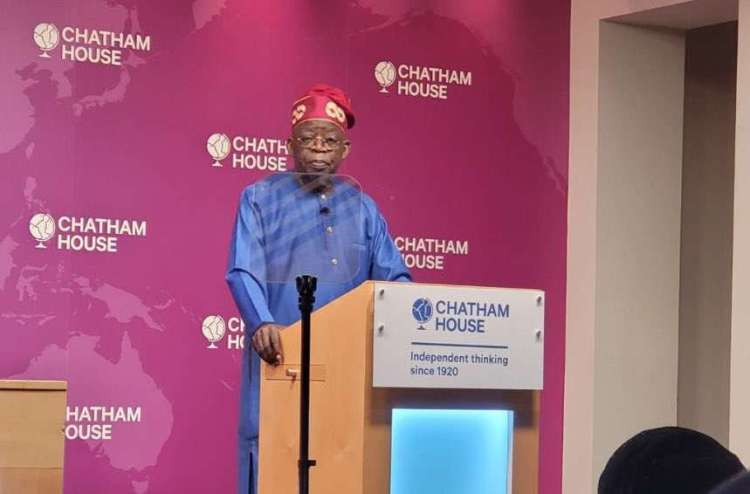 The electioneering of the Presidential Candidate of the All Progressives Congress (APC), Asiwaju Bola Ahmed Tinubu, took an intriguing twist on Monday at the Chatham House in London as he delegated some members of the party to respond to questions posed to him.

Mr Tinubu said he was delegating the questions to his surrogates as a demonstration of his belief in “teamship”.
2022

Presidential candidate of the All Progressives Congress (APC) in the 2023 election, Bola Tinubu, at his Chatham House engagement in London, refused to answer critical questions on how he intends to govern Nigeria if elected in 2023.

Rather than answer questions bordering on the economy, health and Nigeria’s multidimensional security challenges, Mr Tinubu instead assigned them to his surrogates.

The former Lagos State governor assigned Governor Nasir El-Rufai of Kaduna State to speak on how his (Tinubu-led) government would address insecurity and asked the Director of Strategic Communication of the All Progressives Congress (APC) Presidential Campaign Council, Dele Aleke, to respond to the question on oil theft.

READ ALSO: 2023: Onyejeocha Has Failed Our People, She Shouldn’t Be Reelected – US-based Businessman

The APC presidential candidate excused his failure to answer questions as a demonstration of his “philosophies and doctrines that I believe in. It’s teamship. Unbreakable team,” adding that “To demonstrate that, I will choose the first question, assigned to Dele Alake, the second question assigned to Nasir Elrufai, and the third question assign to Ben Ayade.”

While Mr Tinubu claimed to boycott the questions to demonstrate his belief in “teamship,” his repeated incoherence and loss of awareness at public functions suggest a different perspective to his unexpected abstinence from questions.

Mr Tinubu’s aides have shielded him from public debates and live press briefings in an effort to limit the gaffes that come with his participation at public gatherings showing his weak condition, which several commentators have denounced as unpresidential

Tinubu was in Chatham House to speak to Nigerians in the Diaspora on why he should be elected in 2023.

After his presentation which was livestreamed on Arise TV, some members of the audience asked him some questions bordering on insecurity, oil theft, education and economy and how he planned to address crises in those areas if he became president.

As he was asked by the moderator to respond to the questions, Tinubu said he would assign some members of his entourage to do so.

Tinubu also delegated a former Commissioner for Finance in Lagos State, Wale Edun, to respond to a question on how he (Tinubu) would boost the economy if elected.