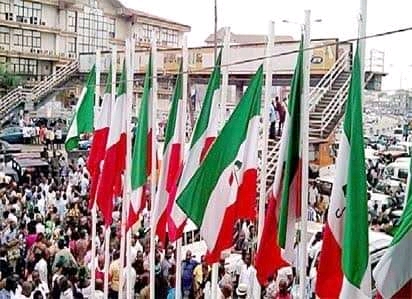 PDP’s position was made known during the party’s NEC meeting, Wednesday, in Abuja

Also, ahead of the party’s National Convention to elect the party’s presidential candidate, the NEC appointed former President of the Senate, David Mark to Chair the Convention Committee.

With the National Executive Committee, NEC of the People’s Democratic Party, PDP all appears set for the presidential primary billed for Eagles Square on May 28 and 29 following the sale of forms and screening of aspirants.

After paying N41million for the expression of interest and nomination forms, each of the 17 aspirants were screened, 15 were cleared and two were disqualified.

The Peoples Democratic Party (PDP) says its presidential ticket will not be zoned to any region.

Debo Ologunagba, PDP spokesperson, announced this on Wednesday night after the national executive committee (NEC) meeting at the party’s headquarters in Abuja.

He said the decision aligns with the recommendation of the zoning committee.

“After a very extensive deliberation, NEC aligned with the recommendation of the PDP national zoning committee that the presidential election should now be left open,” Ologunagba said.

“The party should also work towards consensus where possible.”

The party’s decision implies that all presidential hopefuls from the six geo-political zones can contest at the party’s special convention scheduled to take place on May 28.

Delegates from across the country will elect a candidate to represent the party in the 2023 presidential election at the special convention.

The announcement finally put to rest speculation regarding the zoning of the opposition party’s presidential ticket.

In April, there were reports that the PDP presidential ticket was thrown open — after the zoning committee submitted its recommendation to the NWC of the party.

The situation elicited criticism, especially from those in the southern part of the country.

But Samuel Ortom, governor of Benue and chairman of the zoning committee, denied the claim and said he was misquoted on the matter.

The National Executive Committee (NEC) of our great Party at its 96th meeting extensively deliberated on urgent national issues as well as the preparation of our Party for the 2023 general elections and resolved as follows:

1. NEC commended the dedication of the National Working Committee (NWC) under the Chairmanship of Sen. Dr. Iyorchia Ayu in effectively piloting the affairs of our Party, particularly in the organization of processes preparatory to the 2023 general elections.

2. NEC restated its confidence in the ability of the NWC to lead our Party to victory in the 2023 general elections.

3. NEC applauded other organs of the Party; namely the Board of Trustees (BoT), the PDP Governors’ Forum, the National Assembly Caucus, the Zonal and State Organs of the Party, our structure at various levels, critical stakeholders and teeming members across the country for their efforts in strengthening our Party in the mission to Rescue and Rebuild our nation from the misrule of the APC.

4. NEC commended the NWC for the deft handling of issues relating to the conduct and outcome of our Party Congresses at various levels preparatory to the election of candidates for various elective positions in the 2023 general elections.

5. NEC applauded the spirit of sportsmanship being exhibited by our leaders, critical stakeholders, aspirants and party members on issues relating to our Congresses.

On the State of the nation

6. NEC strongly decried the worsening insecurity and continued killing of innocent Nigerians by terrorists who are emboldened by the exposed refusal of the APC-led government to confront the terrorists even when it knows their locations, listens to their phone conversations and even aware of their plans.

7. NEC Condemned the failure/refusal of the APC government to rescue our citizens still languishing in their abductors’ dens including a victims of last month’s terrorism attack on the Abuja/Kaduna train. NEC urged the Federal Government to live up to its Constitutional duty to secure life and property and ensure an unconditional release of all the abductees.

8. NEC expressed dismay that our security command and control coordination structure has collapsed under President Muhammadu Buhari as Mr. President remains “absent” having abdicated his duties as Commander-in-Chief and surrendering sovereignty over a substantial part of our country to terrorists.

9. NEC further condemned the humongous corruption and deliberate economic manipulations in the APC Government which have crippled our productive sector and resulted in the unbearable high cost of food items and other essential goods and services with consequential excruciating economic hardship to our citizens.

10. NEC rejected the continuing closure of public universities in Nigeria due to the refusal/failure of the APC government to decisively address the lingering industrial action by lecturers in public universities despite the huge resources at its disposal. It cautioned the APC to stop playing with the emotions, destiny and future of our youths and take action to address the industrial action immediately so that our children can go back to their classes.

11. NEC condemned in very strong terms the mass looting of our national treasury and diversion of public funds through orchestrated purchase of APC Presidential Expression of Interest and Nomination Forms by all manner of persons at excessive N100 million to warehouse slush funds for APC to rig the 2023 general elections. We restate our demand to the Economic and Financial Crimes Commission (EFCC) to investigate all APC Presidential aspirants in this regard.

12. NEC restated the call by the Party for the immediate resignation, arrest and prosecution of the Governor of the Central Bank of Nigeria (CBN), Mr. Godwin Emefiele, for alleged manipulations and financial impropriety in the CBN which contributed to the collapse of our national economy.

13. NEC vehemently rejected the continued stay of Mr. Emefiele as CBN Governor after being confirmed as a card-carrying member of the APC. The CBN is the custodian and keeper of all INEC sensitive materials used in all elections. Having been confirmed as a member of the APC, Mr. Emefiele, can no longer be trusted with INEC sensitive materials which are key to the guarantee of free, fair and credible elections.

14. NEC assures Nigerians that the PDP is resolute in taking very firm legitimate series of action in the march to restore and protect the sanctity of our Central Bank and electoral process

Zoning:
15. After a very extensive deliberation NEC aligned with the recommendation of the PDP National Zoning Committee that the Presidential Election should now be left open. The Party should also work towards consensus candidate where possible.

NEC noted the recommendation of the Zoning Committee that in the interest of justice and fair play, the Party should take decision on Zoning timeously so as to prevent complications to the process.

16. NEC ratified the conduct of the Presidential Primary (Special National Convention) to elect our Party’s Presidential Candidate on Saturday May 28 to Sunday May 29, 2022 in Abuja

18. NEC assured of free, fair, credible and transparent processes for the emergence of our Party’s Candidates for all elective positions in the 2023 general elections.