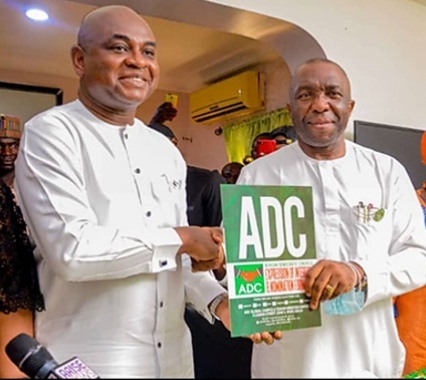 …promise to increase police personnel by 300%…

Professor Kingsley Moghalu (second left) picked up his ADC presidential form in Abuja on May 10, 2022.

A former Deputy Governor of the Central Bank, Professor Kingsley Moghalu on Tuesday picked up the presidential expression of interest and nomination form of the African Democratic Congress in Abuja.

Speaking shortly after picking up the form, Moghalu promised to invest heavily in the education sector by allocating, to the sector, 20 percent of the nation’s budget.

According to him, investing in education can help curb the challenges of insecurity and youth unemployment in the country.

He vowed that the incessant strikes by the Academic Staff Union of Universities will be confined to history once he emerges as President.

He also added that the current inflation rate in the country will be tackled by his administration in order to create a conducive business.

Moghalu told correspondents at the ADC national secretariat in Abuja that politics in Nigeria should be detribalised for the nation to grow and take its rightful place in the comity of nations.

He noted that competent leaders are found in all tribes and religions, adding that it was high time technocrats, intellectuals and experienced people took power from Nigeria’s career politicians.

Nevertheless, Moghalu insisted that the geo-political zones which were yet to produce the president of the country should be given the opportunity to do so come 2023. He promised to tackle the challenges of insecurity, inflation a

Moghalu said his first step to providing security for the nation would be to reform the police and increase the number of its operatives by 300 percent.

He said, “As president, I will reform the Nigeria Police Force. I will increase the police from 250,000 to one million operatives. It is through effective intelligence gathering that we can fight terrorism and win.

“We will take out whatever threatens the nation’s security, because the political will to secure Nigeria is there.”

Speaking on the state of the economy, the former CBN chief said that he would strengthen the leadership of the apex bank to achieve true independence, necessary for tackling the country’s hyperinflation.

“Inflation is the most act on the poor. It erodes the ability of households to save and devalues the purchasing power of the currency.

If there’s high inflation, then it is a performance failure. When I become the president, I will ensure we have an independent CBN with competent leadership,” he said.