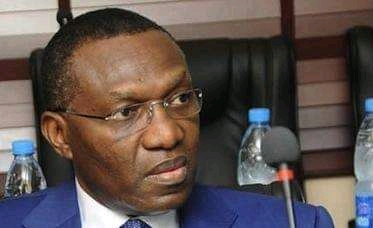 The candidate for the All Progressives Congress in the just concluded Anambra State election, Andy Uba, has rejected the result announced by the Independent National Electoral Commission.
Uba alleged the election result was a charade and had not reflected the wishes of the people.

The candidate’s position was made known by Ambassador Jerry Ugokwe, spokesperson of the Senator Andy Uba Campaign Organisation.

Ugwoke said, “It is surprising that APGA which lost almost 80% of its stalwarts through defection to the APC before the election came out ‘victorious’. The outcome of the election was a charade and did not reflect the wishes of the people of Anambra State.”

The development comes as INEC disclosed its readiness to present the Certificate of Return to the Governor-elect of the state, Charles Chukwuma Soludo of the All Progressives Grand Alliance.
The campaign organisation alleged that its candidate was a victim of widespread electoral fraud and manipulation by INEC.

It said APGA which saw its serving deputy governor in the state and about 17 state and federal lawmakers defect to the APC could not be said to have been in any position to win the election.

Part of the statement reads; “Our popular candidate, Senator Andy Uba, is a victim of widespread electoral fraud and manipulation by INEC in cohort with the Willie Obiano Regime and the security forces deployed to oversee the Anambra State Governorship Election.

“The elections were characterised by widespread irregularities, intimidation and voter suppression in order to clear the path for the inglorious ‘victory’ of APGA in the polls.

“For instance, in polling units where the Biometric Voters’ Accreditation System malfunctioned, INEC went ahead to conduct the elections manually.

There were numerous cases where votes announced by INEC exceeded the number of accredited voters in polling units.

“Another clear manifestation of collusion between the Obiano Administration and INEC was the publishing of results on the Social Media handles of APGA even before the official announcement by INEC.

Yet mysteriously, the votes announced in advance by APGA always corresponded correctly with the official figures released by INEC.
“It is inconceivable that our candidate, who polled over 200,000 votes in the APC primary election would be allocated slightly above 43,000 votes by INEC.

“It is surprising that APGA that lost almost 80% of its stalwarts through defection to the APC before the election came out ‘victorious’.

A sitting APGA Deputy Governor, seven members of the House of Representatives, 10 members of the Anambra State House of Assembly, the APGA party’s member of Board of Trustees, many serving SA’s, SSA’s, in addition to a serving PDP Senator all defected to the APC very timely before the election, yet APGA emerged ‘victorious.

There was definitely no way the carcass of APGA could have defeated the APC without the active collusion and manipulation by INEC and the Obiano Administration.
“What happened on November 6, 2021, fell far below the acceptable standard of a free and fair election and can best be described as an electoral fraud perpetrated by the INEC, Willie Obiano Administration and the security forces.

“We have noted that starting from the appointment of INEC Adhoc staff, who mostly came from Calabar to the distribution of electoral materials and the retention of the Resident Electoral Commissioner, who supervised the second term election of Governor Obiano, it was crystal clear that the game plan was to overturn the popular wishes of the people of Anambra State in the biggest electoral heist of all time in Nigeria’s political history.

“While we appeal to our supporters to remain peaceful and calm, we will not relent in pursuing our stolen electoral mandate to the limit of the law through all the constitutional means available as the facts on the ground did not in any way reflect the outcome of the elections as announced by the obviously compromised INEC.”

Meanwhile, National Commissioner and Chairman, Information and Voter Education Committee of INEC, Festus Okoye has said the commission will issue Certificates of Return to Soludo and the deputy governor-elect on Friday.

“Following the conclusion of the election and as provided for in Section 75 of the Electoral Act 2010 (as amended), certificates of return will be presented to the Governor-elect and Deputy Governor-elect tomorrow Friday 12th November 2021 at our State office in Awka”, he stated.