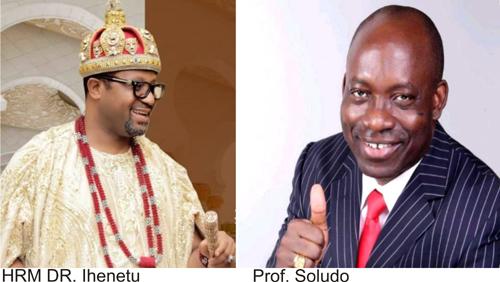 Professor Soludo won with large margin beating other candidates from other political parties.
In a statement, the Imo state- born Royal father known for his peaceful resolution of conflicts, commended Independent National Electoral Commission (INEC) for rising to the occasion by conducting free and fair election free of rancor.

In the same vein, HRM Dr. Ihenetu also praises the Federal Government for providing adequate security for the candidates and the electorates during the election.

In his words of advice to the Governor-elect, HRM Dr Ihenetu appealed to the governor to be magnanimous in victory by forming all-inclusive government. He said, having become governor, he is now father of all in the state.

In his words, HRM Dr. Ihenetu said: “With the track records of Prof. Soludo in the financial sector where he rose to become Central Bank Governor and presently member of President Muhamadu Buhari’s Economic advisory council, I have no doubt that he will move Anambra state forward.”

Equally, HRM Dr. Ihenetu also appealed to other candidates to see Prof. Soludo victory as victory for Ndi Anambra and as such join hand with him to move Anambra to greater heights.

On how he has been managing affairs of Ndigbo in Ghana, HRM Ihenetu said he has continued to ensure that Ndigbo in Ghana live peacefully with their host country. He added that after he and other eminent Igbo leaders in conjunction with Nigeria High Commission in Ghana, resolved Trade dispute between Nigeria traders and Ghana Trade Union, Ndigbo in Ghana have been going about their business without fear of intimidation..