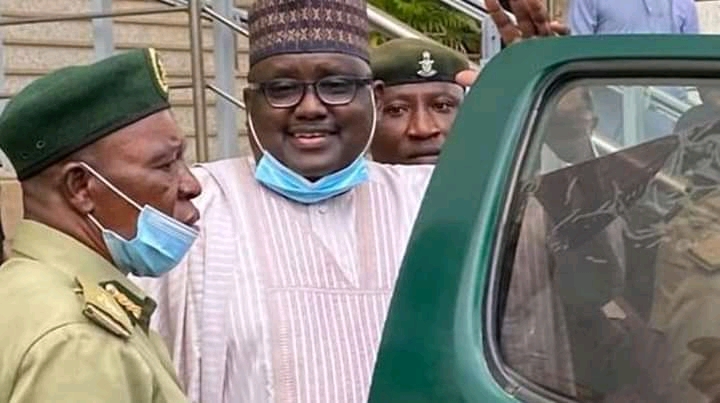 On Monday, a Federal High Court sitting in Abuja held that Maina stole over N2 billion belonging to pensioners.

Former Chairman of the defunct Pension Reform Task Team (PRTT), Abdulrasheed Maina, is currently “living like a king” in a well-furnished, air-conditioned space at the Kuje correctional facility.

According to a report by FIJ, a prison source said Maina, who was sentenced to prison for money laundering, has never been to a prison cell.

On Monday, a Federal High Court sitting in Abuja held that Maina stole over N2 billion belonging to pensioners.

It said most of the victims “have died without reaping the fruits of their labour”.

The Economic and Financial Crimes Commission, EFCC in a statement by its spokesperson, Wilson Uwujaren, had said Maina was wanted for his role in the fraudulent biometric contracts through which he, a former Head of Service, Steve Oronsaye, and two others allegedly stole over N2 billion of pension funds.

But on Monday, the court convicted and sentenced Maina to 61 years in prison for money laundering.

However, the former PRTT chairman will only spend eight years in jail as his sentence will commence

Meanwhile, prison sources told the newspaper that the former PRTT boss had never been to a prison cell.

A source told the newspaper, “Which Maina? Maina that since he was admitted to Kuje correctional facility, he has never seen a cell.

A second prison source told FIJ that Maina was “living like a king” in prison, even though some other high-profile prisoners, such as Jolly Nyame, former Governor of Taraba State, and Farouk Lawan, former House of Representatives member, are indeed in cells.

“Maina is a northerner treated like a king. He is living large inside a well-furnished room in the hospital,” the second source said. “Even Farouk Lawan is inside his cell in Custody 4; Jolly Nyame is in Custody 3 downstairs.”