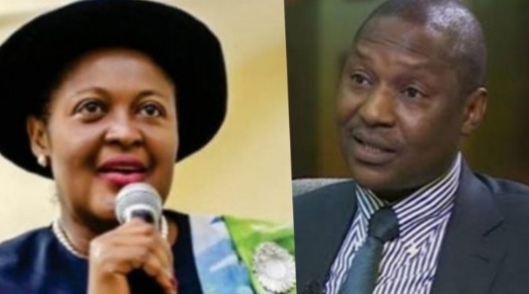 Chief Magistrate Emmanuel Iyanna of Wuse Zone 6 magisterial division in Abuja has admitted that he was lied into signing a search warrant for the residence of a top Supreme Court jurist by the Federal Ministry of Justice under Attorney-General Abubakar Malami.

Mr Iyanna consequently revoked the search warrant he approved against Justice Mary Odili’s residence due to misrepresentation in the first information application supplied by an ad-hoc public asset recovery panel domiciled under the justice ministry and overseen by Mr Malami.

“Upon misrepresentation to this honourable court that led to the issuance of a search warrant in favour of Joint Panel Recovery, Ministry of Justice, against House 9, Imo Street, Maitama, Abuja, dated October 29, 2021,” the senior magistrate said in a fresh order. “In view of the above fact, the said search warrant is hereby revoked.”

Mr Iyanna’s October 29 order came hours after the report that armed operatives have tried to breach the residence of Mrs Odili on Imo Rivers Street in Maitama.

Officers had arrived at the residence bearing a warrant that was issued based on whistleblower information from Aliyu Umar, an Abuja residence. Mr Umar had deposed on October 13 that there were illegal activities going on at 9, Imo Street, Maitama, that should warrant immediate action from the law enforcement. The whistleblower also said in court filings that the tip-off was supplied to the Economic and Financial Crimes Commission.

This prompted Mr Iyanna to issue a warrant on October 29 for the property to be searched. Subsequently, operatives mobilised to Mrs Odili’s house based on the warrant seeking to forcibly search it in the evening of October 29, the same day a warrant was approved. Our sources said the Supreme Court jurist rejected the move to search her residence because she had no pending issues with anti-graft agencies.

Even though the whistleblower stated in court filings that he provided his findings to the EFCC and one of the operatives had told The Gazette that EFCC led the operation, the anti-graft office denied playing a role in the operation.

“If there was any such operation” that Mrs Odili’s house was besieged by anti-graft operatives, “it was not carried out by the EFCC,” the agency’s spokesman Wilson Uwujaren said in a statement to late Friday. Our correspondent had earlier reached Mr Uwujaren for comment prior to breaking the news but received no immediate response.

Mrs Odili’s husband Peter had been under EFCC investigation for alleged fraud that dates back to his tenure as Rivers governor between 1999 and 2007. Mr Odili denied the charges, and a federal judge ordered the release of his international passport earlier this week.

A chief police superintendent, Lawrence Ajodo, also signed off on the operation and The Gazette’s sources previously mentioned that police officers were part of the operation.

The officers left Mrs Odili’s residence following the revocation of their warrant. But the development has elicited harsh criticisms of Mr Malami, whose controversial role in alleged anti-democratic moves of the administration contributed to his new status as a formidable force in President Muhammadu Buhari’s cabinet.

In 2016, Mr Malami supported the State Security Service when its brutal personnel broke into the residences of over a dozen federal judges, including three of the Supreme Court at the time.