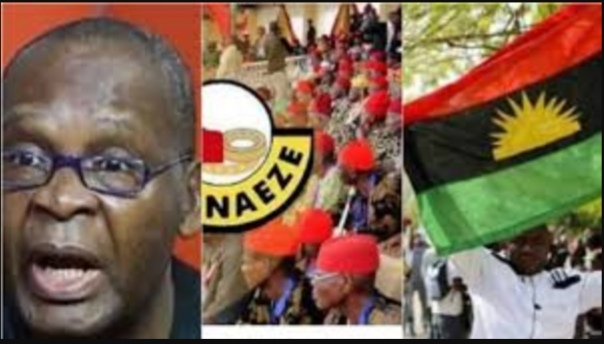 Of recent, Joe Igbokwe has become a manifestation and replication of the biblical Esau in Igboland. He has been hypnotized to see nothing good about his kits and kin.

He can be easily contracted to do any type of hackman’s job against his people. He seems to be the champion and a ready dupe to denigrate the Igbo people. He needs to put on his thinking cap.

There is a popular Igbo saying that whoever was not around when the father was buried starts from his feet to do the exhumation. Joe Igbokwe should reflect over his history in the community. It is a well known fact that the leopard can never change its spots.

Ohanaeze Ndigbo, the apex Igbo socio-cultural organization cannot sit down and watch one single Igbo son ridicule the integrity of Ndigbo with irrational and unjustifiable allegations. It is high time we call him to order so that he can coordinate his tongue with his brain.

There is need to let Joe Igbokwe realise that the quest for Igbo Presidency is not negotiable and can never be compromised by any person or group of persons. It is our turn, based on equity, other geo political zones should see reasons and support this Igbo quest for 2023 Presidency.

Many prominent and eminent Igbo sons and daughters, even people outside the Igboland who know what is equity, advanced this position.

How is it that it is only Joe Igbokwe that knows what is equitous more than all these people? Is his presumed ‘intelligence’ playing on him?

We have very revered prominent Igbo sons and daughters with immeasurable pedigrees as world class successful businessmen and women, detribalized nationalists with human face, eminently qualified, if not more than what we have had so far from any other geo political zones, to be the President of Nigeria.

This is the current Igbo project that no sane Igbo person with his or her thinking cap should downplay or reduce to ethnic politics.

Joe Igbokwe in one of his latest rantings said that the Igbo people are playing ethnic politics. However and whatever he meant he did not meaningfully substantiate.

This leaves one to wonder what he really meant. This is why the Ohaneze  Ndigbo wants to appreciate what is ethnic politics according to Joe Igbokwe.

When a sector of the society is seen as a mere dot in a circle and the people say: no, we are the Archimedean dot, is that ethnic politics?

These are critical issues Joe Igbokwe needs to interrogate himself and see how politically ethnic these are. Or when we are clamouring that our son Mazi Nnamdi Kalu should be released to us unconditionally, could this be the ethnic politics he is talking about?

There is a cogent need to tutor Joe Igbokwe what is not ethnic politics maybe he would retrieve his hypnotized or lost senses and appreciate what is meant by ethnic politics.

We therefore require Joe Igbokwe to retract his comments with public apology to Ndigbo. He has been offending the sensibilities and intelligence of the Igbo people by his unbridled garrulity which smacks of people who talk before they think.

It is a well known saying that charity begins at home. This recent ranting from the infamous Joe Igbokwe came at the heels of the just concluded Anambra elections. Why didn’t he come to Anambra and campaign for his so much prided idea and mission of non ethnic politics?

At least he would have proven to the people what is ethnic politics and not resort to vituperations on his Facebook and on the pages of newspapers. No one bites another from afar.

Joe Igbokwe, your party or your candidate’s misfortunes should not be the cause to insult the Igbo people. Where were you when your party acted a Nollywood styled primaries that gave the flagbearer your so much mouthed ‘game of numbers’ which later became a mirage during the actual voting? It is easy to rant from your cocoon and do the bidding of those who give you porridge to sell your people.

You couldn’t walk your talk. Hypocrisy in manifestation. Remember the fate of Esau. Remember the proverbial black sheep. Your immediate family and kinsmen have once made a public statement disowning you and your puerile and selfish rantings.

You have shot yourself and your posterity on the leg. Don’t let it develop a gangrene. Look for the roads back to sanity.

The prodigal son was welcomed back irrespective of records. Our hands are wide open. We still see you as one of us. You are our son. However, we need to remind you of the popular Igbo saying of people who know their onions in Igboland: Dike amaghi ebe o n’eje, ma o ma ebe o si. This is how a true Igbo man thinks.

He goes in peace, spreads peace and comes back in peace. He doesn’t go to learn how to denigrate his people.

The Igbo people strongly believe in the one Nigeria project of equity and fairness. The Igbo people believe in a Nigeria where no section or society is seen as second class citizens while others are born to rule and therefore become stooges to others.

We do not need to lick others feet before we are no longer seen and treated as second class citizens or the war vanquished.

It’s high time Joe Igbokwe wakes up from his self-sedated political slumber. It appears he can only remain Joe Igbokwe through blackmailing his kits and kin and thrive on the ratu ratu syndrome. The politics in the southeast has gone beyond this level. Joe Igbokwe,  wake up. Do the needful. God will bless you!