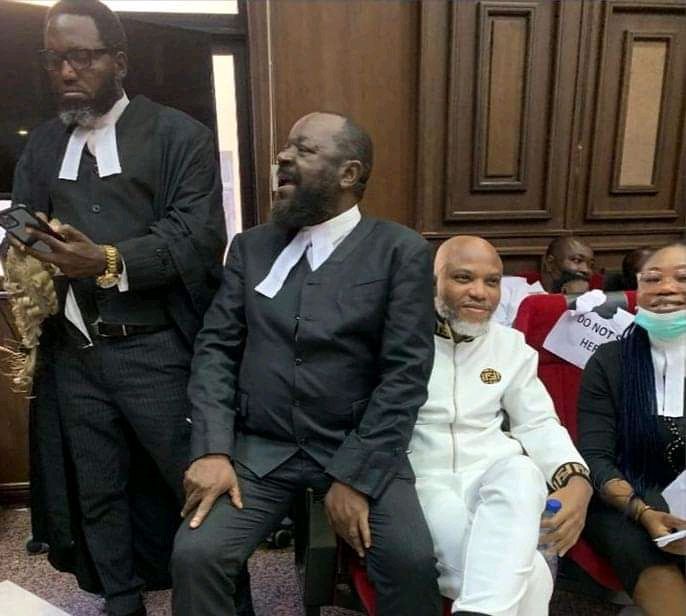 The trial of the leader of the Indigenous People of Biafra, Nnamdi Kanu has been adjourned to the 19th and 20th of January 2022.

Kanu had informed the judge, Justice Binta Nyako that the Department of State Services operative refused to grant his lawyer access to the court room, BBC Pidgin reports.

He had earlier protested the refusal of the DSS to allow some of his lawyers access into the Court.

Hotmedia.ng learnt that the DSS brought Kanu into the courtroom at 9:52am.

The IPOB leader made his third court appearance since June when the security agents repatriated him to Nigeria.

Meanwhile, some groups were seen outside the court protesting the death of Ahmed Gulak.

Recall that in May, Gulak who was a former Special Adviser on Politics to the then President, Goodluck Jonathan, was killed by gunmen in Owerri, Imo State.

Kanu, who was re-arraigned before trial Justice Binta Nyako of the Abuja Division of the Federal High Court, is facing a seven-count amended treasonable felony charge the Federal Government preferred against him.

The Nigerian government had in the amended charge marked FHC/ABJ/CR/383/2015, which was signed by a team of government lawyers led by the Director, Public Prosecution of the Federation, Mr. M. B. Abubakar, alleged that Kanu had in furtherance of an act of terrorism, issued a deadly threat that anyone that flouted his sit-at-home order should write his or her will.

The Nigerian government alleged that as a result of Kanu’s directive, banks, schools, markets, shopping malls, fuel stations were not opened for businesses, with vehicular movements grounded in the South East region of the country.

It said the action amounted to an offence contrary to and punishable under 1(2) (b) of the Terrorism Prevention Amendment Act, 2013.

The Nigerian government equally lined up five witnesses to testify in the matter, among whom are officials of the DSS and one Ronald S. who was identified as the manager of a hotel in Lagos State.

Also today the leader of the  Indigenous People of Biafra (IPOB), Nnamdi Kanu, was on Wednesday brought to court by officials of the Department of State Security (DSS) for his trial.

Kanu was brought into the courtroom amid heavy security.

This was made known by Aloy Ejimakor, the Special Counsel to Kanu adding that the IPOB leader arrived court at about 7am on Wednesday.

Earlier reported how DSS operatives denied journalists access to the courtroom where Kanu’s trial will be held.

Heavily armed security operatives have turned back journalists from entering the court premises.

The hooded operatives reportedly barred both print and broadcast Journalists from major media organisations from entering the court premises.

“We are working on instruction. We can’t let you people in”, one of the operatives told newsmen.

Similarly, some lawyers and Igbo traditional rulers that arrived at the court were also turned back.

Other security agents on the ground include men of the Nigerian Police Force, and the Nigerian Security and Civil Defence Corps.

Officials of the court had after a meeting it held with leaders of the National Association of Judiciary Correspondents, NAJUC, on Tuesday, disclosed that Justice Nyako insisted that she would only allow five journalists into the courtroom.

Meanwhile, a five-man list, comprising of journalists from the Print, Television, Radio and Online news outlets had been earlier submitted to the court.