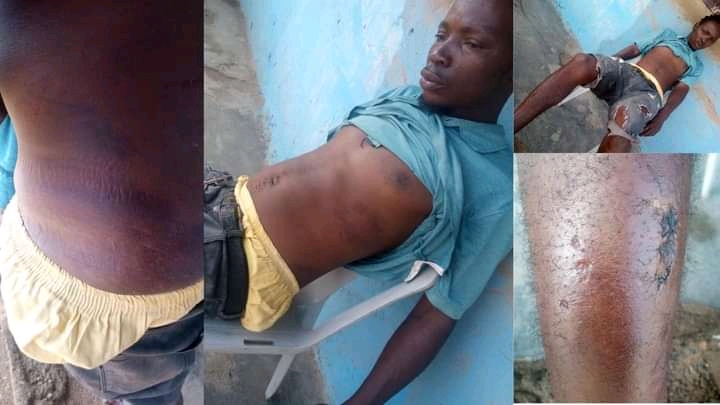 Ibrahim Kadiri, one of the six Independence Day protesters arrested in Abuja on Friday for protesting against insecurity and the anti-people policies of the President Muhammadu Buhari regime has narrated how he was tortured and dehumanised by soldiers attached to Federal Capital Territory Police Joint Security TaskForce

The protesters were violently dispersed with tear gas and chased into the bush where they were beaten and brutalised by the gun-totting security operatives, led by female police officer ASP Altine Daniel, who arrived at the venue of the protest in a white Hilux vehicle.

Injuries inflicted on Ibrahim Kadiri, one of the Independence Day protesters arrested, tortured by soldiers in Abuja

The names of the arrested and detained protesters include Benjamin Mannaseh, Mohammed Labaran, Danjuma Patience, Kingsley Bala, and Ibrahim Kadiri.

Ibrahim, who is still recuperating, narrated his ordeal to SaharaReporters shortly after their release.

He was arrested by policemen and handed over to the soldiers believed to be the ‘torture squad’ of the team, who tied him up and tortured him.

He said he was taken to a location near Transcorp Hilton Abuja, where he was asked by the soldiers to get inside drainage with dirty water.

He said injuries were inflicted injuries on his body.

According to him, one of the ‘torture squad’ members seized his mobile phone, removed the SIM card in it, and flung the phone into the drainage.

He said, “The police arrested me and handed me over to the soldiers. When we got to a location around Transcorp Hilton, they asked me all manner of questions. They asked how much were we paid to protest. Who sent us?

“They now asked me to lie down inside dirty drainage water and said I should be searching for fish. They beat me to the point that I didn’t know that I could ever survive it.

“As I am talking to you now, I cannot walk because of the pain. The soldiers are the ‘torture squad’ because they are the ones who dehumanised me.”

At the time of filing this report, the young activist was still in harrowing pain and could not walk.

One of the other detained protesters who spoke to SaharaReporters, Benjamin Mannaseh, said they were arrested when they went back to the protest ground to look for their phones and other belongings that got missing when they were tear-gassed.

He said they were taken to Galadima police station, from where they were moved to Garki.
He said the Divisional Police Officer of the station instructed the officers to take them to the headquarters of the
disbanded Special Anti-Robbery Squad (SARS), popularly known as Abattoir.

Mannaseh said they were locked up inside ‘Sanctuary Cell’, which is meant for sick people and those who sustained gunshots wounds.

Mannaseh said, “We were there in the sanctuary cell and the officer in charge of the cell came and told us that we should give them money or call our people to come and bail us with N200,000 but we told them that we committed no offence. They left us and instructed the leader of the cell to give us more beating.”

Meanwhile, the six protesters were released around 7:00pm on Saturday.

The protesters had on Friday morning blocked Nnamdi Azikiwe International Airport Road, Abuja to protest against insecurity, impunity, inflation, among others.

They also demanded the resignation of President Muhammadu Buhari over his incompetence which has brought untold hardship and agony on Nigerians.