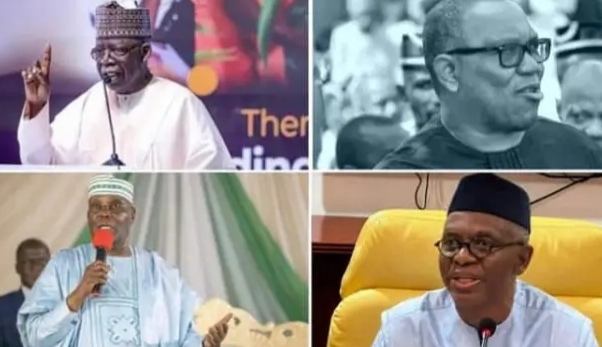 At the Arewa capital, Bola Tinubu, the presidential candidate of the All Progressives Congress (APC) and his counterpart from the Labour Party, Peter Obi, put their political strength to a test.

The presidential candidate of the Peoples Democratic Party (PDP), Atiku Abubakar, had his share of the game two days before others.

The politicians hauled verbal missiles at each other at the event, which the Arewa Joint Committee organised to interact with the presidential candidates to know their plans for the region.

•Atiku is ungrateful, does not want to promote Nigeria’s unity – Tinubu ;

Tinubu fired the first salvo at the event when he asked the presidential candidate of PDP, Atiku, to reciprocate what he did for him by stepping down and endorsing him ahead of the 2023 election.

Tinubu recalled how he stepped down for Atiku to contest for president in 2007 under the defunct Action Congress (APC) platform.

“I supported Atiku Abubakar in 2007 then. Don’t blame me if I ask for a payback period. It’s payback. Let him endorse me now instead of him conducting rallies around Kaduna while I’m talking to you people here.”

•‘How did you make money?’-Tinubu recalls a question he asked Atiku on their first meeting with the late Shehu Yar’Adua ;

Tinubu said his first contact with Atiku came when he was just leaving Nigeria Customs, and he asked Atiku how he made money, he responded that he was selling cars.

Tinubu said he told Atiku to go and read the civil service regulations.

“They asked him questions: ‘How did you make money?’ He said from selling cars. Can you as a civil servant be involved with other trade and businesses? You have attracted disqualification and you don’t deserve to compete with others.”

The host governor, Nasir El-Rufai, tried to demarket Peter Obi before the northern leader when he recalled how the Labour Party flagbearer detained him in a house arrest during a by-election in Anambra when he was in the state to monitor the poll.

El-Rufai noted that he would have retaliated, adding that he has the First Mechanised Division of the Army in Kaduna that could carry out the arrest.

However, the governor said he would not order the arrest of Obi because “because we are Northerners, we are civilised people.”

•”We are expected to become circumspect in our thinking and avoid recklessness in our speeches,” Peter Obi tells El-Rufai ;

“I believe that as we grow older and are saddled with more responsibilities, we are expected to become circumspect in our thinking and avoid recklessness in our speeches.”

Atiku Abubakar, who was the first to be invited by the Arewa leaders earlier, made comment considered tribalistic as he told the region’s leader to opt for another northerner rather than “a Yoruba or Igbo” to succeed President Muhammadu Buhari, who also came from the region.

This position was literarily countered by the Kaduna state governor when he said the northern governors support Tinubu in the spirit of justice and fairness.

El-Rufai argued that the governors believe in the legacies of Sir Ahmadu Bello and Tafawa Balewa, and then exhibit it in their characters.