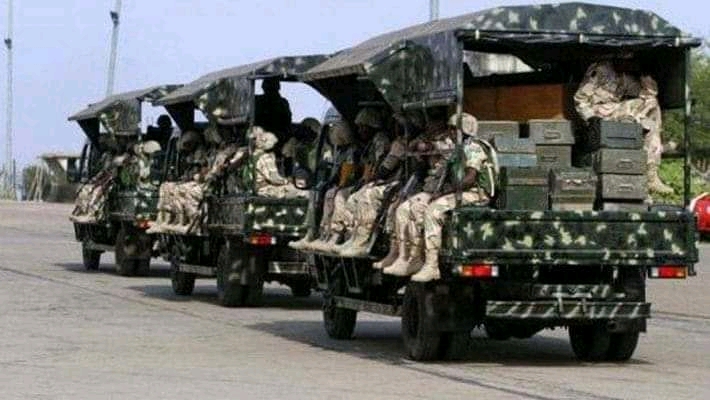 A stockpile of military hardware with about N28 million cash has been reportedly carted away by marauding bandits who ambushed a select group of Nigerian troops on reinforcement mission to quell pockets of communal clashes in Benue State, Hotmedia.ng lhas learned.

Citing an internal army communication, a source told The People’s Gazette that soldiers dispatched from Katsina-Ala Local Government Area to deliver weaponry to troops in Oju LGA (171km from Katsina-Ala) were overrun by an armed militia said to be from the Konshisha district of the state, in an attack believed to have occurred on Tuesday.

According to The Peoples Gazette, senior military officers said N28 million was also with the soldiers at the time of the ambush, all of which the attackers cornered and disappeared into the night on the fringes of the Benue River.

“Yes, the bandits stole weapons and also about N28 million from the soldiers,” the senior officer said. “The entire situation has been under investigation since the headquarters heard about it.”

The official said no conspiracy was suspect on the part of the soldiers but said it was a “deeply disturbing” situation that soldiers could be easily waylaid by a ragtag group of bandits. The source of the money and its purpose were not immediately disclosed to The Gazette.

The logistics team, led by A.T. Adedayo — an army captain — was reported missing, including a general-purpose machine gun and over 2,000 rounds of ammunition.

Sources said the ambush site was met deserted when a reinforcement deployed at Oju stormed the scene following an alert.

A joint operation by troops of 72 Special Forces Battalion and anti-banditry formation, Operation Whirl Stroke (OPWS), was planned to be conducted in the area to rescue the missing soldiers, a source said.

An army spokesman could not be immediately reached for comments.

Armed militia groups have continued to hold sway in remote parts of Benue, as the North-Central state grapples with recurring communal clashes and farmer-herder unrest.