Gunmen have reportedly killed the youth leader of the All Progressives Congress in Igboeze South Local Government Area of Enugu State, Lucky Okechukwu.

Police are yet to confirm the incident as details are still sketchy.

Our correspondent reliably gathered that the victim was shot dead last night in the Unadu area of the town.

A chieftain of the main opposition party in the state, who didn’t want his name mentioned because he was not authorised to speak for the party confirmed the incident.

“Yes, it is true. I don’t know his real name but we received information that he was shot dead by gunmen last night. If the party want to speak on the incident, it will definitely be going to issue a statement on that,” the source said.

When the state Police Public Relations Officer, DSP Daniel Ndukwe, was contacted on the telephone, he could not take his calls or respond to text message.

The hoodlums also set the station ablaze after guns and ammunition were carted away.

The attack our correspondent gathered occurred in the early hours of Sunday morning at Arum Inyi Police Division.

A video of the attack our correspondent obtained showed two bodies suspected to be policemen killed lying in front of the station’s perimeter fence. 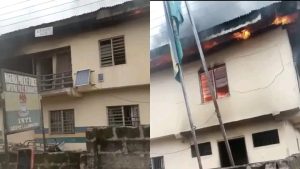 In the video, the roof of a storey building police station is seen on fire.

Voices in the background of the video identified one person as a policeman while there was controversy over whether the second person is a policeman or not.

A resident of the Arum Inyi where the police station is located confirmed the incident to our correspondent.

The resident who spoke on condition of anonymity said, “Actually, I left the community on Saturday for Enugu, but I got information from my community a few hours ago that gunmen attacked the police station in my town, and that they killed one police officer. Right now I don’t have further details.”

A security alert being circulated on social media platforms in Enugu State capital warned residents of the area and its surroundings to be careful and be security conscious while they move around.

Efforts to get the reaction of the state police command on the incident were not successful as the Command’s spokesman, DSP Daniel Ndukwe, could not take his calls or respond to a text message sent to him.