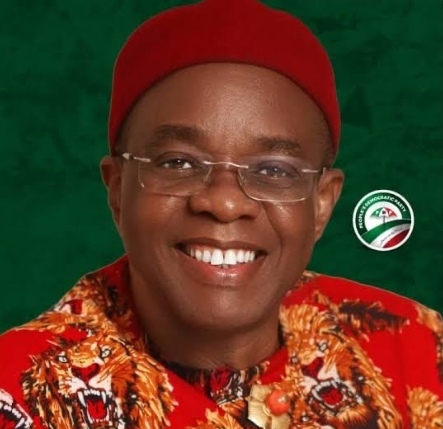 Prof. Ikonne was a former Vice Chancellor of the Abia state University Uturu and the gubernatorial candidate of Peoples Democratic Party, PDP in Abia State for the 2023 general elections.

Following a release from the family of the late candidate indicates that Prof. Ikonne died at the National Hospital in Abuja at about 4am on 25th January 2023.

The news has been confirmed by the Abia State Hon. Commissioner for trade and investment, Hon. John Okiyi Kalu through his social media platform.

The Governor of the State, Dr. Victor Okezie Ikpeazu is yet to issue a statement at the time of filing this news.

This was announced in a statement by his son, Dr Uche Ikonne, on Wednesday.

According the the statement “I regret to announce the death of my dear father, *Prof Eleazar Uchenna Ikonne,* who died at the National Hospital Abuja today, 25th January 2023 by 4am after a brief illness.

He was recovering after taking proper treatment in the United Kingdom but relapsed a few days ago leading to multiple cardiac arrests for which he didn’t recover from.

Further details and arrangements would be made known to the public after deliberations and meetings are made within the family.

The media had on Monday reported that the National Youth Movement warned the national leadership of the party to reconsider the “failing health” of Prof Uchenna Ikonne and find a replacement for him.

The PDP youths movement according to a release on Tuesday had noted that Ikonne displayed his frail health status at the Abia State PDP Campaign Kick-off at Umuahia on November 24 from where he was taken for treatment and had since not returned.

In the release signed by Salahudeen Lukman, President, Gbe Benjamin Orduen, National Secretary and Elekwachi Joshua, Coordinator, South East Zone, the PDP youths had said Ikonne who had been under “intensive care abroad and his inability to recuperate in the past 60 days” confirmed talks that he was not a suitable candidate.