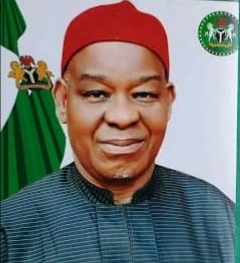 Following the approval by the APC Caretaker/Extraordinary Convention Planning Committee for the constitution of the State Congress Appeal Committee, the APC leadership in Ebonyi State under the leadership of Alhaji (Dr.)Haroun Ogbonnia Ajah (Nze Nna Nyeri Ugo 1 of Afikpo) wishes to avail the APC national leadership and as well draw the attention of the Nigerian public of the non availability or disappearance of the APC Appeal Committee in Ebonyi State to take submission and other observations from the APC members as it relates to the Congresses of 16th October,2021.And as the discuss in Ebonyi State zeroes in on the APC leadership in the state, we see the need for us to to inform Ebonyians and the general public on our reiterated position on the need for the old APC members in Ebonyi State to produce the APC State Chairman.

Despite the landslide victory of our candidate Alhaji (DR.)Haroun Ogbonnia Ajah at the state congresses held at New Layout Primary School, Abakaliki on the 16th of October 2021, Chief Stanley Okoro Emegha who is an appointee of Gov.David Umahi, continues to parade himself as the factional State Chairman of the APC.

The national appeal committee sent to Ebonyi State has also been hijacked by Chief Stanley Okoro Emegha and those that appointed him.

Intelligence reports at our disposal indicates that they have been lodged in a hotel at mile 50 Kpirikiri Abakaliki as usual by the Chief Stanley Okoro Emegha group and their activities conducted in upmost secrecy without our knowledge.

You would all recall that a similar scenario played out during the conduct of the State Congress where Chief Emegha and his group after facilitation of the reappointment of Chief Ideato C.Ideato led Congress Committee illegally, hijacked them and subsequently handed over written results to them to take to Abuja against due process and rule of law.

We refute any claim by the Congress Appeal Committee of being fare to due process and the concept of fare hearing in Ebonyi State if at all such committee showed up in Ebonyi State.

They have remained faceless as always and never made themselves available due to partiality and corrupt practices.And we wish to state unequivocally state that any purported setting of an appeal committee to Ebonyi State is the figment of the imagination of the members desperate to betray APC in Ebonyi State because of money and financial inducement.

We are calling on Chief Emegha, the appeal committee and the national leadership of the party to save Ebonyi APC which is today heavily factionalized, from destruction.APC is fast disintegrating in Ebonyi State as the Chief Stanley Okoro Emegha faction due to their abuse of the consensus option lacks and does not have a holistic grasp and solution to the various challenges and problems confronting APC in Ebonyi State as new entrants without the involvement of His Excellency,Dr.Ogbonnaya Onu,the Hon.Minister of Science, Technology and Innovation, Federal Republic of Nigeria.

APC is in a mess in Ebonyi State with the Chief Stanley Okoro Emegha imposition while Alhaji (Dr.)Haroun Ogbonnia Ajah has all the approaches to the myriad of problems APC is facing at the moments after the defection of Gov.Umahi and his sychophantic followers to APC on 19th November,2020.

Once again,we express our appreciation to the APC Caretaker/Extraordinary Convention Planning Committee for its commitment to take APC to the next level of reality and consolidation.