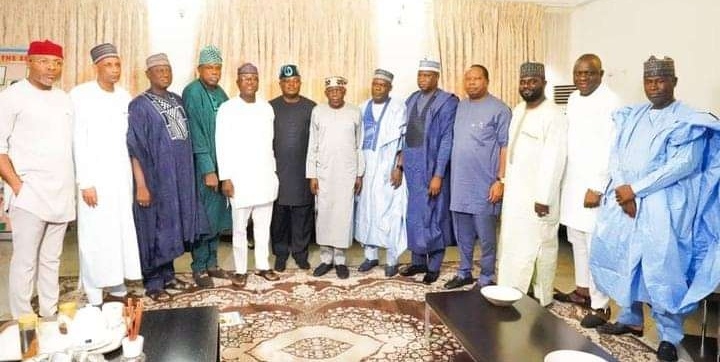 Ahead of the 2023 general elections, the presidential candidate of the All Progressives Congress (APC) has met with House of Assembly Speakers from the party in Abuja.

The meeting with the APC Speakers on Saturday is coming on the heels of the Osun State governorship election, where the ex-Lagos Governor left the state for the nation’s capital.

Tinubu canvassed their support for his presidential ambition, pushing for stronger democracy in Nigeria.

The APC candidate also defended his choice of ex-Borno State Governor, Senator Kashim Shettima as his running mate for next year’s presidential poll.

Noting that Shettima was finally chosen as his running mate after wide consultations and some considerations, the APC candidate described his running mate as a patriotic and passionate man with the capacity to serve.

He explained that since the APC chairman, Abubakar Adamu, is from the North Central, it was just right to look at another zone, especially the North-East, for his running mate.

“The agreement is that North-East should be produced. So I recommended and picked Kashim Shettima that is known to be very qualified, has a temperament and commitment, loyal to the party.

“Patriotism dictates that and he is very patriotic. Kashim Shettima has been nominated, his name is with INEC.

“There is no traditional way of selection of a running mate. It is my prerogative. There is so much thinking that goes into it.

“Can you work with this individual? I see the capacity, I see the temperament? I see the vision for the mission at hand and I find him very suitable for that. So I picked him, his name has been submitted.”

Tinubu also commended President, for his understanding on the issue of the selection of Shettima as a running mate.