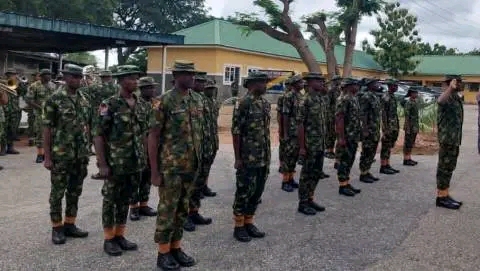 The military’s worry was heightened by the beheading of a Local Government Chairman in Imo State, on Sunday, by gunmen suspected to be members of IPOB.

The Nigerian military is putting up fresh “drastic measures” in the South-East to curtail the excesses of the gunmen ravaging the region and killing security personnel including soldiers.

The rising attacks on its personnel in the South-East region of Nigeria which are allegedly being carried out by the members of the Indigenous People of Biafra (IPOB) are giving the military concerns and have necessitated the new measures, sources said.

READ ALSO : Nothing Can Stop 2023 Elections In South-East; We Have Superior Weapons – Nigerian Army

PRNigeria reports that the military’s worry was heightened by the beheading of a Local Government Chairman in Imo State, on Sunday, by gunmen suspected to be members of IPOB.

A military intelligence operative who pleaded anonymity said, “It is disturbing that while our troops are working to ensure peace and security in the society; the gunmen not only abduct their own people, they also attack our personnel and destroy other facilities. Very soon, we will unveil strategies on curtailments that will address the current embarrassing situation once the people in the affected communities cooperate with us.”

The gunmen in the viral video showing the beheading of the Sole Administrator of Ideato North local government area, Mr Christopher Ohizu, said “Hope (Uzodinma, the state governor), hope you have seen this man kneeling here. You know this man. The way I am killing this man is the way I am going to kill you. You think hiring soldiers will save you.

“We are a group of people that see what is happening in the land and we are saying no. We must fight to make sure that Biafra is restored. Biafra must be restored. As far as the Eastern region is concerned no election.”

The video showed Ohizu whose hands were tied backward in a thick forest putting on only trousers being filmed by the gunmen while slaughtering him after collecting a ransom of N6 million from his family.

The media had in 2022 reported that a female officer, Lieutenant PP Johnson, was on Monday December 26, 2022, abducted by suspected IPOB members while visiting her grandmother in Aku-Okigwe in Imo state, shortly after she completed her Cadet training and was subsequently commissioned as a Lieutenant into the Nigerian Army.

The Army spokesperson, Brig. Gen. Onyema Nwachukwu, had said that “It is instructive that the officer’s circumstances as a woman and a Nigerian citizen of South Eastern extraction did not dissuade her abductors from dehumanising her in their mindless attempt to commit atrocities under the guise of fighting for Biafra.

“This evidently is another pointer to the myriads of crimes being unleashed by IPOB/ ESN on Ndigbo, the very people they claim to be fighting for their emancipation.”

Nwachukwu had insisted that IPOB/ESN were terrorists masquerading as freedom fighters and did not deserve the support of anyone, particularly the people of South-East Nigeria.