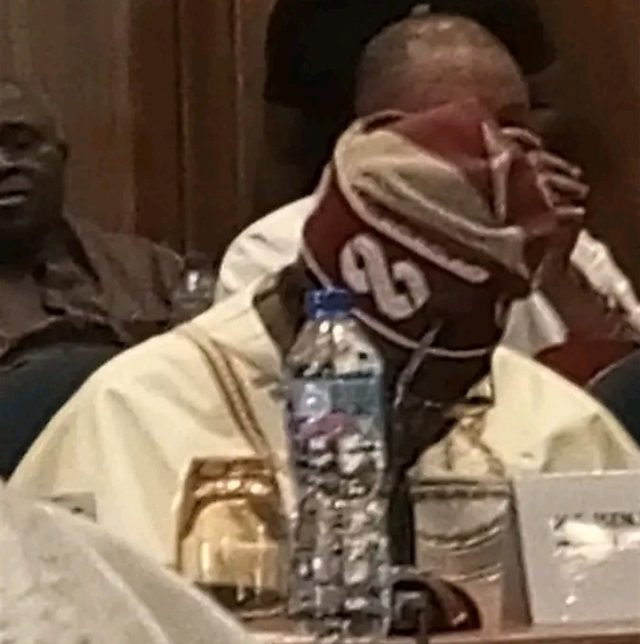 The meeting was organised to ensure proper conduct of the candidates, their parties and other stakeholders, especially during the campaigns ahead of the elections.

The presidential candidate of the All Progressives Congress (APC), Bola Tinubu, fell asleep on Friday during the meeting that the National Peace Committee organised in Abuja, in what could further prove the frailty of is health.

According to Abdulsalami, the meeting was organised to ensure proper conduct of the candidates, their parties and other stakeholders, especially during the campaigns ahead of the elections.

While the meeting was ongoing, Omoyele Sowore, presidential candidate of the African Action Congress (AAC), confirmed the moment Tinubu was caught on camera, sleeping.

READ ALSO : 2023: We Are Watching And Spying On All Those Working Against Us – Kashim Shettima, Tinubu’s Running Mate

Sowore who shared the picture on Twitter wrote, “We just returned from a meeting of party leaders/Presidential candidates with the national peace committee in Abuja, the Presidential candidate of The ⁦ @OfficialAPCNg @officialABAT slept through the meeting, he didn’t say a word. His party chair spoke on his behalf.”

Tinubu, 70, has been seen spotted in other public displays such as tripping over and sleeping during meetings since he announced his decision to contest for president.

In 2021 alone, the former Lagos governor spent over 80 days patronising hospitals in France, the United States and the UK where he underwent surgeries while Nigerian hospitals have been poorly equipped by the APC government.

He was flown out of the country some days before Christmas in 2020 to Paris, France.

There were speculations that he tested positive for COVID-19 but his media aide later denied such reports.

The APC leader returned to Nigeria on January 24, 2021, after an absence of about one month from Nigeria.

He then went for a medical check-up on Thursday, June 10, 2021, in France and was conspicuously absent from the one-day working visit of President Muhammadu Buhari to Lagos State.

“Tinubu is in Paris, France for a medical checkup. His health is deteriorating due to old age,” a top source had told SaharaReporters.

Tinubu, amid death rumours, was forced to return to the country on Tuesday, June 15, 2021.

SaharaReporters also reported that Tinubu was hospitalised in Maryland, the United States in July 2021 where he had knee surgery.

“He had surgery last week,” an authoritative source had disclosed at the time.

On August 9, 2021, Tinubu had another knee surgery at the John Hopkins University Hospital in Maryland, United States.

The APC chieftain, it was learnt, left the US for the United Kingdom on crutches, a few days after the surgery.

Sources close to Tinubu had told SaharaReporters that he wanted the surgery in Paris, France but changed his plan over rumours of his death.

“Tinubu had his second surgery at John Hopkins University in Maryland recently. He was accompanied by a popular Nigerian doctor in Chicago. He had wanted the surgery in Paris but when rumour was rife about his death, he hurriedly left for Nigeria and went to John Hopkins,” one of the sources had said.

“He left the US for the UK on crutches,” another source had revealed.

In 2021, the President paid a visit to Tinubu in London and the latter was seen with a walking stick during Buhari’s visit, confirming SaharaReporters’ story that he underwent a second surgery in the United States.

A few weeks after winning the APC ticket, the former governor was in Paris, France to attend to his medical needs.

He was also in London in October 2022 to visit his doctors.

Tinubu currently toes the path of President Buhari, who himself has spent hundreds of days collectively on medical leave in the United Kingdom since he assumed office in 2015.