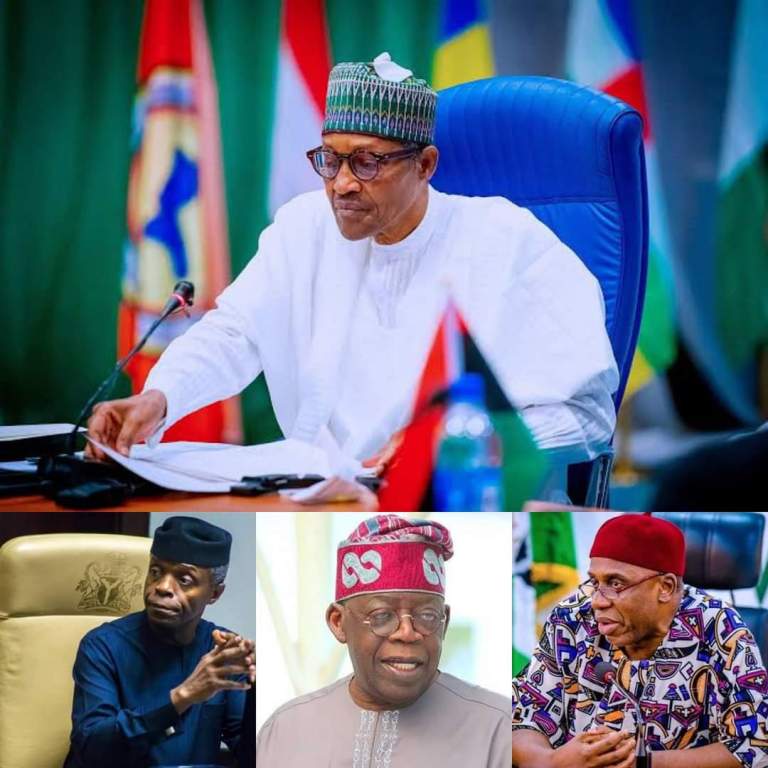 According to the source, the President is critically studying the aspirants, their attitudes, actions, backgrounds and others before either making his pronouncement on the issue or directing his trusted aides on whom to queue behind among them.

Some of the aspirants, who have made their intentions known to run for the presidency are Vice-President Yemi Osinbajo; Minister of Transportation, Mr Rotimi Amaechi; Minister of Labour and Employment, Senator Chris Ngige; a former governor of Lagos State, Asiwaju Bola Tinubu; Kogi State Governor, Yahaya Bello; his Ebonyi State counterpart, David Umahi; a former governor of Abia State, Senator Orji Kalu; and an ex-governor of Imo State, Rochas Okorocha.

They have openly declared their interest to succeed the President, whose second term ends on May 29, 2023.

Other rumoured to have presidential ambition in the party but have yet to declare their intentions include the Governor of Ekiti State, Dr Kayode Fayemi; and the Governor of the Central Bank of Nigeria, Godwin Emefiele.

Buhari had expressed fear that his favourite presidential candidate might be “eliminated” if he revealed the identity.

He said this during an exclusive interview with Channels Television in January, while noting that he had no special interest in the 2023 presidential election.

“It is not my problem,” he replied when asked about the next presidential election.

He stated, “I am not interested. I believe that whoever wins the poll should be sworn in as the next leader of Nigeria.

When asked about his preferred successor, the President replied, “I won’t tell you my favourite for 2023; he may be eliminated if I mention him. I better keep it a secret.”

The ruling party has fixed May 30 and 31 for its presidential primary election.

The APC, in a letter addressed to the Chairman of the Independent National Electoral Commission, Prof Mahmood Yakubu, dated April 6, notified the electoral body of the dates and schedule of its primaries for the nomination of candidates for the 2023 general elections.

The letter was signed by the party’s National Secretary, Senator Iyiola Omisore.

This serves as a formal notification, pursuant to the provisions of Section 85 of the Electoral Act, 2010, as amended. Kindly arrange for your officials to monitor the exercise accordingly. While hoping to receive your cooperation, please accept the assurances of my highest esteem,” the letter read in part.

However, the Presidency source said there was no way Buhari would allow all the APC presidential aspirants to go into the race without having an input.

He said, “You saw how he handled the race for the chairmanship of the party? Was it rancorous? No, it was not. The President knows what to do at the right time. The man, who is the national chairman of the party today, was not even in the race in the beginning. And he said so when he assumed office. He said he was never interested about a month before the election.

“The President knows the characters of those in the race. He knows their antecedents and what they can do or how they will behave when they get to power. So, he will never allow the party to go into the primary without giving direction. Have you ever seen an incumbent, who is not interested in who his political party will present as his likely successor? Even the governors are equally doing the same thing at the state level.

“So, I am sure the President will speak next month before the presidential primary. He is a tactician. He knows how to handle such a delicate matter.”

Meanwhile, the decision of the APC to peg its presidential nomination and expression of interest forms at N100m seems not to have intimidated some serving public officials as they have expressed willingness to pay the sum.

For instance, it was learnt that a group known as Businessmen for Osinbajo would purchase the forms for the Vice-President. The group, led by Dr Tayo Fashogbon, said N97m had been budgeted for the forms for Osinbajo.

However, an aide to the Vice-President, who wished to remain anonymous, said more than three groups had offered to buy forms for Osinbajo.

Okorocha told our correspondent that he could afford the N100m forms.

“I can afford to obtain my form by myself,” said the Imo-West senator.

Okorocha agreed with the APC’s decision to peg the form at a high cost, adding that it would indeed separate the serious aspirants from the unserious ones. He, however, said the party ought to give people enough time to purchase the forms.

The former governor also said aspirants should not be buying forms with their personal money. Rather, their supporters should purchase the forms for them.

He added, “I think what should be done going forward is for every presidential aspirant and governorship aspirant to have people purchase their forms, at least if you can have 10,000 people contribute and you know the money is coming from their accounts to support you, it means that you’re a popular candidate.

“This gives you some kind of seriousness. And time must be given because if they’re saying N100m and slam it on people and say tomorrow, bring N100m, that’s also a problem for most people, who have contacted their supporters. So, going forward in our nascent democracy, I think people should learn to sponsor their candidates rather than the candidates sponsoring themselves. So, he knows he owes the people.”

In a chat with our correspondent, the spokesperson for the Governor Yahaya Bello Campaign Organisation, Lateefat Kolapo, said the governor would not step down because of the N100m forms.

Kolapo noted that the Kogi State governor became wealthy long before coming into power in 2016.

Responding to a question, Kolapo stated, “Why will Yahaya Bello step down because of the amount for forms; N100m? Do you know what he even was before becoming the governor of Kogi State?

“He was the single largest donor to the aspirations of most of all these people you see in federal places everywhere; he supported people to get their tickets to win elections with proceeds from his chain of businesses. He’s been a successful businessman all along.

“Forget about Kogi State or about him being a governor; in his personal capacity as Yahaya Bello, he can buy N100m forms for as many candidates as are willing to contest. That aside, Yahaya Bello is going to be on the ballot no matter what. He cannot step down for anybody. That is not even on the horizon at all.”

In a chat with correspondent, an associate of the Minister of Transportation, who wished to remain anonymous, said money for the forms had already been raised by some of his support groups.

The associate stated, “For Amaechi, he has supporters all over the place, who are willing to support him in his presidential bid. So, with N100m for forms, I’m sure they’ll be able to come up with funds for getting the forms.

Generally, most of his campaign activities will be funded by supporters and well-wishers. The capacity to pay is a different thing. When you are running for an office like that, and you have supporters and volunteers, who are ready to support you, why not allow them to take the lead?”

He noted that some support groups had already stated publicly that N2bn had been saved towards Amaechi’s presidential campaign.

“At one time, if you remember, there was a group that came out and said ‘Amaechi, run, we are ready to take the burden’. In fact, members of the group even said they would take him to court if he didn’t run. Another group said it had saved up to N2bn for Amaechi’s campaign,” he added.

For Tinubu, it was learnt that campaign groups were still meeting on the matter. The Tinubu Support Group led by Aminu Suleiman was alleged to have issued a cheque for the aspirant but Hotmedia.ng learnt that this was untrue.

The South-West Agenda for Asiwaju 2023, a group aimed at ensuring that Tinubu emerges President, said it was still meeting.

However, an aide to Tinubu said the issue of forms was definitely not a problem for the former governor of Lagos State.

“I’m sure you are aware that Asiwaju has donated hundreds of millions to several states during his condolence visits to several governors. He donated N50m to Katsina, N50m to Kaduna, N50m to Niger and several others. So, you should know that N100m is too small to stop the Jagaban. Besides, there are too many people who are willing to buy the forms for him,” the aide boasted.

The Minister of Labour and Employment, Senator Chris Ngige, has also raised half of the money. According to him, the balance will be raised by his teeming supporters.

“For somebody like me, I was budgeting N50m – my supporters and I. But when the thing came out and it was N100m, they started calling me,” he said on Channels Television.

However, an IT expert, Adamu Garba, who is one of the youngest presidential aspirants in the party, condemned the high cost of the forms.

In an interview with our correspondent, Garba stated, “I think it (cost of forms) is too expensive. We are trying to monetise access to public offices and you know, public offices are supposed to deliver public goods. What you do in public offices is to filter candidates based on their competencies and capacities to deliver on the issues that we face today as a nation.

“As opposed to putting only money as a means to filter candidates, we are supposed to have an arrangement where these candidates are willing to present a proposal that is convincing to the Nigerian public and to Nigerians based on our issues before allowing them to go into the contest.”

Garba said in a country like Nigeria, where the minimum wage was N30,000, a worker would have to work for 278 years in order to save enough to buy the N100m forms.

On whether he would step down, Garba said many of his friends had begun reaching out to him to offer their support.

The IT expert added that crowdfunding might also be explored.

“So, we are going to release the campaign account details where everybody is expected to bring his own share,” Garba stated.