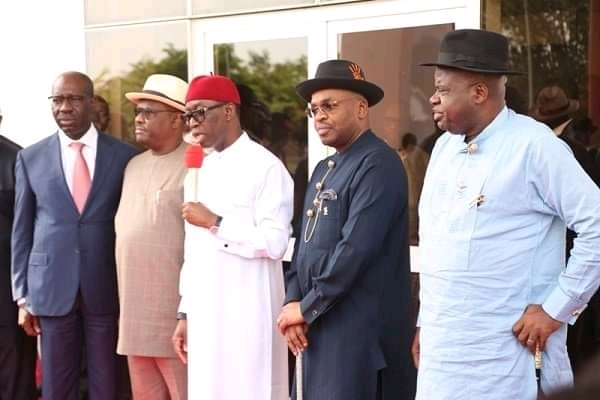 Southsouth governors came under fire on Sunday for failing to form a regional security outfit one year after they promised to do so amid rising insecurity.

The Southsouth Elders’ Forum (SEF) and the Movement for the Survival of Izon Ethnic Nationality in the Niger Delta (MOSIEND) accused the governors of nonchalance.

A year after they made the promise in Asaba, the Delta State capital, the governors have not made any tangible move to set up any common security outfit.

They made the promise in March last year after the Southsouth Governors Forum (SGF) meeting.

They had promised to replicate the Southwest’s Amotekun in the region to tackle security challenges.

SEFcoordinator, Sarah Igbe, said: “About three years ago in Benin, the Pan Niger Delta Forum (PANDEF) passed a resolution asking for regional security. They asked the governors to come together and make it possible. But since then even after they made the promise about a year now, I don’t think they are serious.

“Southsouth governors are not working for the interest of the people. They could not set the BRACE commission that had been there. They cannot also sit down and think of what to do with their 13 per cent derivation.

“Many of the communities are living in squalor while they squander their money. There are many issues to address for the benefit of the people but they don’t have the interest of the people at heart.”

Also, MOSIEND said the Southsouth governors were paying lip service to the security issues in the region.

MOSIEND President, Mr Kennedy Tonjo-West, said the governors relied so much on the policing arrangement by the Federal Government which could not help the region.

Tonjo-West contended that the Police was underfunded and lacked the manpower to contain the security situation in the country.

He agreed that security was everybody’s responsibility but submitted that the core mandate of government is to protect lives and property.

He said: “We can’t say right now if their meeting was just on papers or it did not see the light of the day or there was a disagreement, but it is very important that as the chief security officers for the various states in the region that they try to come back again and dust up the file and attend to this issue.

“You are aware of some of the recent reports that some terrorist groups are planning to invade Lagos and the South. Such reports are worrisome. One would have reasoned that the Southsouth governors will not allow it to get to the situation it has assumed right now.

“Are there any preparation for that? When we say preparation, we are talking about collective preparation. How prepared are they? How do they share their security votes? What is the networking outside of the statutory security outfit that we have?

“As for me, it wouldn’t have been a problem because they already have security votes that they could use to kick-start whatever project or agreement they arrived at that meeting.

“I don’t know if they are not taking it seriously, but for me, I could say that the governors are not taking security matter seriously. I say this in the sense that so much reliance on statutory policing will not help at all.

“We are using this medium to ask the governors to wake up from their slumber, to begin to compare notes and look at where there are security flashpoints. Delta State has had a recurrence of herdsmen attacks. How prepared are these states? What are they using the security votes for right now tangibly? Is it that you provide vehicles for the police, then you say that is it.

“What about the armoury? You are not assigned to purchase armoury for them, the Federal Government does that. If that is the situation, why are we not prepared? For us, we express great concern and it is worrisome. We believe that if these governors don’t wake up at this point, they might just take us unawares.

“The governors should not allow that. Whatever is their schedule, they should appropriate adequate attention and time to make sure that they address this matter before we are overrun. They have to make hay while the sun shines; a stitch in time saves nine.”

Explaining the delay, the Delta State Governor and Chairman, SGF, Dr Ifeanyi Okowa, said the need to get the proposed regional security for the Niger Delta right far outweighed the need for speed.

Okowa, who spoke through his Information Commissioner, said the BRACED Commission had the responsibility to deliver the final details for the security outfit.

Okowa blamed the COVID-19 pandemic for slowing down the regions security plans, adding that despite plans to float a regional outfit, states also had the responsibility to secure their borders.

He assured that the region was determined to float the outfit noting that Delta State had gone ahead with its internal security outfit codenamed Operation Delta Hawk.

He said the Southwest regional security outfit, codenamed Amotekun, could not be a standard for states of the Niger-Delta region.

He said: “How much progress has Amotekun made in securing the Southwest? So, it cannot be a standard for us. We believe that what they did is right but there is a need to take steps to set up an efficient and workable security outfit, not a political outfit.

“I am not saying Amotekun is political. We are not doing politics here because security is important and getting it right is more important than embracing speed.”