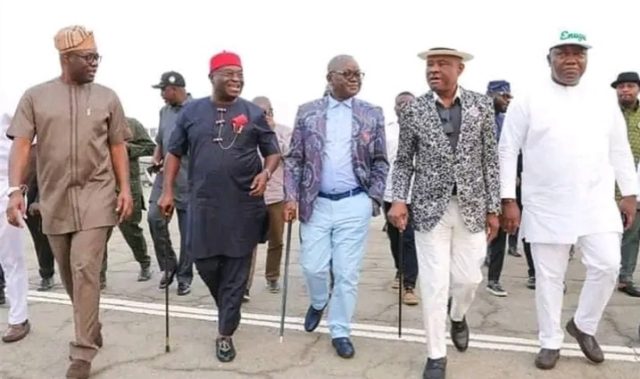 … There seems to be an end to the crisis rocking the opposition political par­ty, Peoples Democratic Party, PDP.

… Wike Finally Settles For Atiku, Set To Announce Him As Choice Presidential Candidate

Finally PDP G-5 Governors Reveals Preferred Presidential Candidate
In what appears to be an apparent change in stance, three aggrieved state governors elected on the platform of the main opposition Peoples Democratic Party (PDP), are set to announce their decision to rescind their hardline position against their party and its Presidential Candidate, Alhaji Atiku Abubakar.

Sources within the party who spoke with Saturday Telegraph during the week said the decision of the three governors might not be unconnected with the current stalemate within the ranks of the G-5 Governors over who to back apart from Abubakar for the Presidency among contenders jostling for the position in other parties.

The five governors alongside other chieftains of the party have in the last few months called for the sack of National Chairman of the PDP, Senator Iyorchia Ayu, from office citing the need to balance power within the party.

Collectively they have formed a group called the Integrity Group to press home demands. They (members of the Integrity Group) have found it increasingly difficult to reach a conclusion on the alternative to the Adamawa State-born presidential hopeful, prompting some of them (members) to reconsider their stance on the issue.

According to a competent source within the party, three of the governors have been reaching out to the leadership of the party as well as Abubakar to express their readiness to work for the party during the presidential election. “I can confirm to you that they have been sending emissaries to Waziri from time to time.

This action is due mainly to efforts of stake-holders who have continued to make strenuous efforts to resolve the crisis within the party,” the source said. The source who pleaded not to be mentioned listed the affected Governors ‘that have opened talks’ with the party to include Seyi Makinde (Oyo), Ifeanyi Ugwuanyi (Enugu) and Okezie Ikpeazu (Abia). “I am very confident that their decision to this effect will be made known to the country and the party very soon,” the source said. 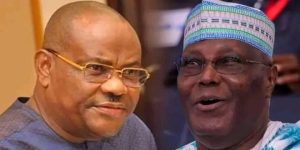 When pressed to state what the stance of the other two governors namely Samuel Ortom (Benue) and Nyesom Wike (Rivers) are, the source simply said, “For now, the two of them have proven to be hard nuts to crack because they are still sticking to their guns.” Another source close to Abubakar who also pleaded not to be named due to what he considered as a very sensitive nature of the issue confirmed that, “I know that a lot of talks are ongoing on both sides and they (the talks) are yielding positive results.”

He added that stakeholders from the two sides have stepped in “to bring everybody along on the same page and things are looking good for the likely resolution of the crisis very soon.” According to him, the change of attitude is due to prevailing local politics in their respective states which could prove fatal for them considering the fact that many of their supporters are vying for other offices under the banner of the PDP.

“There is no way they won’t yield because of the local politics within their states. Many of them are currently under intense pressure from candidates contesting for other political offices and they (the G-5 Governors) are coming to terms with that reality,” the source said.

This is as the leader of the G-5 Governors of the party, and the Rivers State Governor, Nyesom Wike has approved the venue for the campaign rally of the pres­idential candidate of the PDP, Atiku Abubakar.

Wike said approval has been given to the Presidential Cam­paign Council (PCC) of the Peo­ples Democratic Party (PDP) to use the Adokiye Amiesimaka Stadium for the campaign of the party’s presidential candidate, Al­haji Atiku Abubakar in the State.

The governor, however, ex­plained that the approval granted, at no cost to the Presidential Cam­paign Council, is that the Stadium will be accessible to the council 48 hours to the February 11th, 2023 presidential flag-off campaign in Rivers State.

PDP Chairman Slumps Dies During Rally
Governor Wike, who disclosed this while speaking at the cam­paign flag-off rally by the Rivers State PDP Campaign Council in Oyigbo Local Government Area on Friday, said the Director-Gen­eral of the PCC in Rivers State, Dr. Abiye Sekibo has no right to take possession of the stadium one month before the date of the stipulated event.

He warned Dr. Sekibo not to provoke the Rivers State govern­ment by desperately wanting to take possession of the State-owned stadium weeks to the campaign, or else the approval will be canceled.

“Nobody gave you one month. So, if you dare it again, to go and force yourself into the stadium, I will cancel the approval with immediate effect. Dare it again, I will cancel it. Heaven will not fall. In fact, if heaven falls now, we will be happy that it was in our time heaven came down.”

The governor wondered why Dr. Sekibo was acting against the approval given to him and said it appears that he is finding a rea­son to blame in the event that the rally fails.

“I know you are not ready to do that rally. You are only looking for an excuse. But you must do it. I know you are going to im­port people, no problems, go and import. We have given you the stadium.”

Governor Wike also took a swipe at the All Progressives Congress (APC) in Rivers State for blaming the crisis that greeted the campaign of its governorship candidate in Mile one Diobu, Port Harcourt on Thursday.

The governor stressed that APC became a victim to the brewing crisis between the two factions in Rumuwoji community because they did not address their demand adequately.

Otherwise, Governor Wike wondered why APC did not en­counter crisis with their rallies when they used the Tipper Park in Etche Local Government and the IYM secretariat in Ikwerre Local Government.

The governor asked them to stop complaining if they are not ready for the forthcoming gen­eral election because the PDP in Governor Wike mocked Senator Andrew Uchendu, because despite serving in sev­eral administrations, he failed to attract development project to his Mgbuitanwo communi­ty. According to him, it was his administration that contracted Julius Berger to construct in­ternal roads, fitted with street light in Mgbuitanwo.

The governor stressed that the APC governorship can­didate, Tonye Cole, in collu­sion with the immediate past administration of Governor Chibuike Amaechi, sold the State gas turbines and divert­ed $50 Million from the State account.

Governor Wike said the APC governorship candidate is now facing criminal charges with the state government de­manding from him to refund the $50million, which it wants to use for development projects.

The governor further ac­cused the APC governorship candidate of masterminding the killing of scores of persons in Abonnema by the military during the 2019 general elec­tion.

The Rivers State governor told the Oyigbo people to know that the PDP governorship can­didate, Sir Siminialayi Fubara, will continue from where his administration will stop and consolidate on the gains made already.

In his address, Rivers State PDP governorship candidate, Sir Siminialayi Fubara, issued stern warning to Mr. Tonye Cole, to focus on his campaign and leave him out of his affairs.

Sir. Fubara insisted that his administration, when elected will follow in the footsteps of the outgoing government on the slogan of continuity and consolidation.

According to him, he will build on the infrastructural development secured by the Wike’s administration in Oyig­bo, sustains the gains in secu­rity, provision of quality edu­cational infrastructure, creates conducive business climate to promote small-scale business­es, while improving on the qual­ity of life of the citizenry.

Senator Barinada Mpigi, who spoke on behalf of the candidates said they are fully ‘Sim-plifed”, willing to serve the interest of their constituents and the state at large. He said they will do all that Governor Wike has asked them to do.

Former leader of Oyigbo Legislative Assembly, Mr. Ebe Owulo said the projects deliv­ered by Governor Wike in Oy­igbo have collapsed the opposi­tion party in the area.