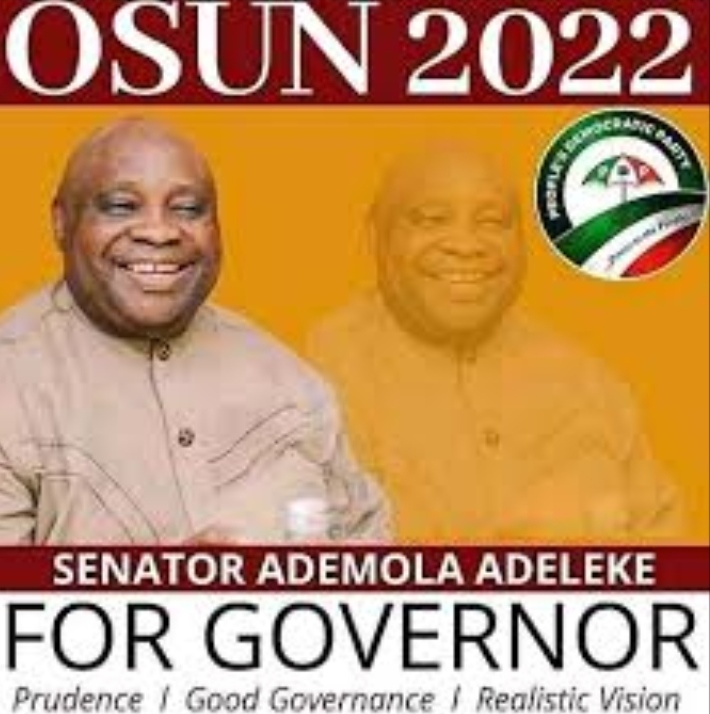 The President of Osun Youth For Good Governance and Democracy, Hon Gbenga Ajayi assures PDP support and votes of the Osun Youths, if Senator Nurudeen Ademola Adeleke is the party’s flag bearer in the forthcoming election.

In a press release signed by himself on 3rd December, 2021, Hon Gbenga Ajayi stated that For PDP to Win Osun 2022 Gubernatorial election, Senator Nurudeen Ademola Adeleke must be its candidate.

The Youth Leader hinted that Osun Youths has made up their mind to vote for PDP and ensures it’s Victory, He maintained that Senator Nurudeen Ademola Adeleke is the best candidate PDP should present. Osun Youth have already referred to Ademola as  “incoming Governor of Osun by 2022” Ajayi stated in his statements.

Hon Gbenga Ajayi the president of Osun Youth For Good Governance and Democracy said Senator Ademola would defeat Oyetola or whoever the APC would be presenting as a candidate in the July 16 governorship election in 2022.

As PDP is preparing to hold its primary, “more than the overwhelming majority of PDP members in Osun and leaders, are for Ademola Adeleke. So, any day, anytime, if PDP go to the field for the primary, we are sure that Ademola Adeleke will emerge victorious with the help of God and support of the people.” Gbenga said.

The President of Osun Youth For Good Governance and Democracy had said the Osun Youths are backing Ademola Adeleke because he “performed wonderfully during the last elections.

He has won two elections in quick succession. In the Senatorial election, he won nine out of 10 local governments. He defeated the sitting governor before the abracadabra and remote control from Abuja changed the whole thing and since that time, he has not left the party. He remain a faithful and loyal party member.

PDP should know that Osun Youths are saying Adeleke is the one they want; if Youths are endorsing him right, left and centre, PDP as a party should not see anything bad in that. Rather throw in the line of success and victory.

However, we are not saying that whoever is interested should not come out. No! It shouldn’t be so. Let those who are also interested come out and vie,” but Senator Adeleke Must be its candidate, if PDP must win the Election. Hon Ajayi noted.

According to report the two chieftains of the PDP who are yet to declare interest in the governorship are Akin Ogunbiyi and Sanya Omirin. The duo are not match to Senator Ademola Adeleke in way both in popularity and capacity. As the PDP slated its primary for February, next year. Adeleke must clinch its ticket for Osun 2022 Governorship Election.

As politicking gather momentum ahead of July 16 2022, Hon Gbenga Ajayi advices People’s Democratic Party, PDP to Uphold and stand on the agreement and decision of the Reconciliation Committee led by former Senate President, Dr Bukola Saraki.

Where PDP unanimously agreed that Senator Nurudeen Ademola Adeleke will be the Governorship candidate of the party (PDP) in the 2022 gubernatorial election in Osun State.

The recommendation was part of the highlight of resolutions arrived at a reconciliatory meeting of the Osun PDP, mediated by the national reconciliation team, headed by its chairman and a former Senate President and two-term governor of Kwara State, Dr. Olubukola Saraki. Ajayi recounted.

With Senator Nurudeen Ademola Adeleke as PDP Candidate for Osun 2022 Governorship Election, PDP is a goal and sure winner of the election because Osun Youths have pitch their tent in Senator Ademola Adeleke’s candidature. Gbenga maintained