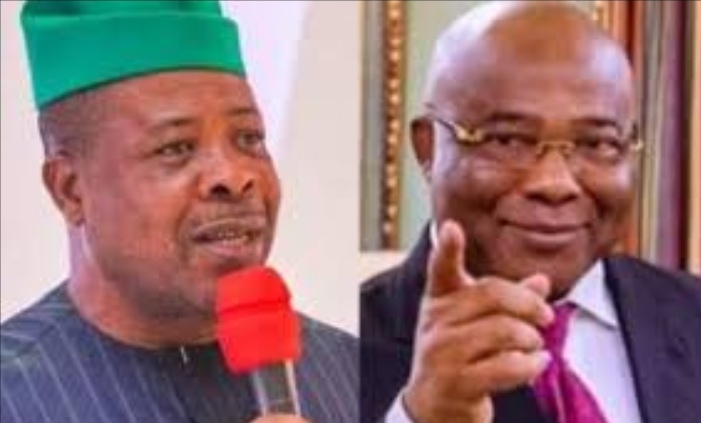 This is even as the leaders have also demanded that governorship position be rotated to Owerri Zone at the end of Governor Uzodimma’s constitutional two-term mandate of eight years in office.

In a communiqué issued at the end of the meeting which was signed by the host HRM Eze Akujobi David Osuagwu, all other leaders, the stakeholders eulogized Uzodimma for investing in human capital beyond infrastructure and industries, saying they considered the huge investment in human capital development as a veritable ingredient for sustainable development.

They expressed happiness over the governor’s performance in the area of quality infrastructure with particular reference to the dualisation of Owerri – Orlu road (36km), the Owerri – Okigwe road, Phase one (29km), the reconstruction of Owerri – Umuahia road through Mbaise as well as the rehabilitation of numerous roads within Owerri metropolis.

Flash Back: In February 2020, Uzodinma Told Ihedioha, PDP To Prepare For 2023

Imo State Governor, Hope Uzodinma, has told  Emeka Ihedioha and the Peoples Democratic Party to forget about the 2019 governorship election in the state and focus on the 2023 polls.

Uzodinma, who addressed All Progressives Congress supporters who paid him a  solidarity visit   at the Government House in Owerri on Saturday, said  his  January 14  victory at the Supreme Court had been affirmed by the people of the state and God.

The governor,  who was represented by his deputy, Prof Placid Njoku, insisted  he would defeat Ihedioha again in the next election.

The former representative of Orlu   zone in the Senate,  wondered why Ihedioha had been laying claim  to the governorship of the state when the apex court had confirmed that he didn’t win the election.

“Seven Supreme Court justices ruled that Hope Uzodinma was the duly elected governor of Imo State without any minority judgment. “

The APC caretaker committee chairman in the state, Marconi Nlemigbo, said  the South-East was happy to have an APC governor.

According to him,  Igbo are now closer to the 2023 political arrangements, nationally.

Meanwhile, the Speaker of the Imo state House of Assembly, Collins Chiji on Saturday said more lawmakers would join the ruling APC from the PDP.

Chiji revealed that by the next legislative sitting, APC will have 26 lawmakers.

He enthused that every lawmaker at the state house of Assembly wants to join the APC because of the personality of the governor.

The Speaker said the state was lucky to have a governor like Uzodinma who he said ‘‘has an unhindered access to the President.’’

The Speaker likened the state to the national grid, saying it would enjoy the benefits of being a state ruled by an APC governor.

He said, “Imo State House of Assembly is comprised of 27 lawmakers but as I speak to you now, 26 of us have joined the APC because of our governor.

“Nine lawmakers joined immediately the Supreme Court delivered judgment in our governor’s favour. On the next legislative day, eight more lawmakers defected to the APC.

‘‘Just watch what will happen on the next legislative day, more lawmakers who have not defected will defect, making it 26 APC lawmakers.”

He said that no lawmaker was financially induced to join the ruling party.