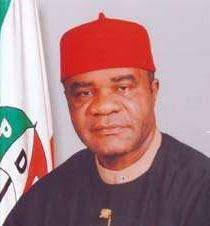 A former National Chairman of the People’s Democratic Party (PDP), Vincent Ogbulafor, is dead. He was aged 73

He died peacefully early Friday morning, according to family sources. ‘‘Dede Ukwu, Hon. Vin. Ogbulafor passed on last night. He died in Canada,’’ a message from his relative revealed on Friday night.

Known for his frequent controversial statements, Ogbulafor was very influential during his time as PDP scribe and later Chairman.

”Chief Vincent Ogbulafor KSM really died in the early hours of today in Canada at 73. The Royal Family of Ogbulafor will announce a date for the burial ceremonies, which will most likely take place next year,” Chief Goddy Uwazurike, a lawyer and close associate of the deceased said.

He was the head of the family. Eternal rest grant unto him O Lord. Let perpetual lighty shine on him,” Uwazurike said.

“He had said his ruling PDP at the time would be in power for 60 years, a dream that never came to pass, following the Party’s loss to the All Progressives Congress (APC) in 2015.

Ogbulafor became PDP national chairman on March 8, 2008 and started his tenure on a controversial note with his comments, saying he did not worry if Nigeria became a one-party state.

At an interactive session with media executives at the Banquet Hall of the Sheraton Hotel in Abuja, the former PDP chairman said: “I don’t intend to speak longer than this. I have done justice to addressing you on issues and party politics of our great party and I expect that all Nigerians in no distant time would all return to PDP. I don’t care if Nigeria becomes a one-party state. If we succeed in bringing all the states of the federation under one umbrella, then it means we are doing a good job.’’

Sources close to the family confirmed the death of the former member of PDP Board of Trustees (BOT) to Prime Business Africa on Friday night.