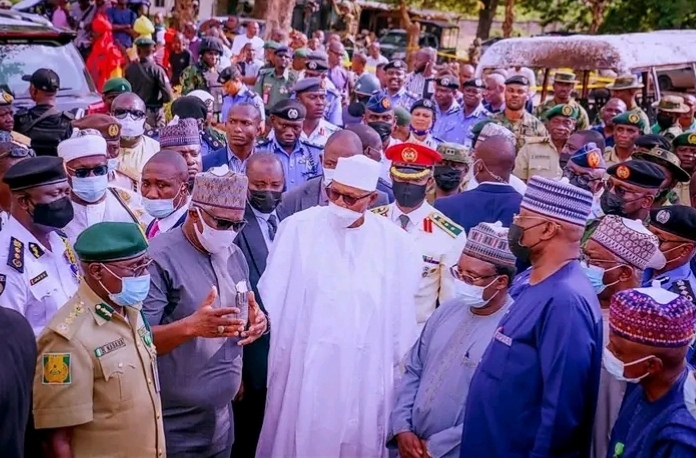 ….. Buhari Asks ‘How Can Terrorists Organise, Have Weapons, Attack Kuje Prison And Get Away With It?’

President Muhammadu Buhari has expressed shock over Tuesday’s terrorist attack on the Kuje Correctional Centre in Abuja, the nation’s capital.

The media had reported that terrorists suspected to be members of Jamar Ansarul Muslimina fi Biladi Sudan, popularly known as Ansaru attacked the centre on Tuesday night and freed inmates including their members and Boko Haram terrorists held in custody.

Reacting on his verified Twitter page on Wednesday, the President said he was disappointed with the intelligence system.

“Saddened by the attack on the Medium Security Custodial Centre, Kuje. I am disappointed with the intelligence system. How can terrorists organize, have weapons, attack a security installation and get away with it? I am expecting a comprehensive report on this shocking incident,” he said. 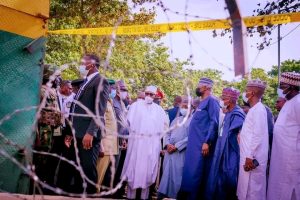 Another source also dismissed the claim by the Minister of Defence, Bashir Magashi, that 64 Boko Haram members escaped, saying that over 201 members of the group were unaccounted for.

“A total of 879 inmates escaped from the facility during the unfortunate attack. As of the time of this report, 443 have been recaptured, 551 inmates are currently in custody, 443 inmates are still at large, 4 inmates are dead and 16 inmates sustained various degrees of injuries and are being treated at the moment. However, efforts are ongoing to recapture all fleeing inmates,” NCS spokesperson had said.

“The Service will deploy its Corrections Information Management System in synergy with National Identity Management Commission to track all fleeing inmates and return them to custody.”

The President earlier visited the scene of the attack before his scheduled trip to Dakar, Senegal.