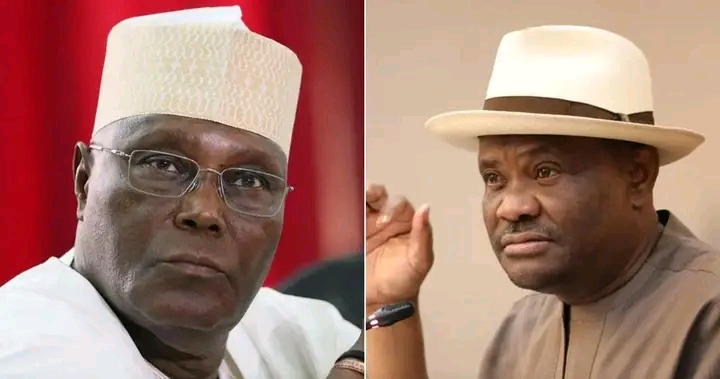 Governor Nyesom Wike of Rivers State has rejected the call for him to have one-on-one meeting with the presidential candidate of the Peoples Democratic Party (PDP) and former Vice President, Atiku Abubakar over the lingering crisis on the choice of running mate.

The PDP has been enmeshed in deep crisis since Atiku picked Governor Ifeanyi Okowa of Delta State as running mate for the 2023 general elections.

The crisis has also degenerated to some members of the party calling for the resignation of its National Chairman, Iyorchia Ayu.

Wike, who came second in the party’s primary election, on Tuesday asked Atiku to rather meet with his team for peace talks on the terms proposed to the party, especially as it concerns the resignation of Ayu.

The Nation reports that the Chairman of the PDP Board of Trustees (BoT), Senator Walid Jibrin, had suggested that Atiku should lead a reconciliation team to Wike, but Wike indicated that he would depend on the advisory from the “Strategy Team.”

Also, a BoT member of the party, Waziri Adamu, yesterday suggested that Wike should be appointed as Director-General of the Atiku Abubakar Campaign Organisation.

Meanwhile, Wike who has rejected the one-on-one meeting with Atiku cited lack of faith in any personal agreement with Atiku.

A source said, “There is no likelihood of Wike having one-on-one private discussion with Atiku. Shortly after the primary, the governor had a side meeting with Atiku in Abuja and nothing was adhered to.

“He was shocked that Atiku has not told Nigerians what transpired between him and Wike after the primary and how he arrived at Governor Ifeanyi Okowa as a running mate.

“Since there was no full disclosure, Wike has directed that fresh talks with Atiku should be with his strategy team members, who will come up with an advisory for him.”

It was learnt that members of Wike’s strategy team include Governors Seyi Makinde of Oyo State, Governor Samuel Ortom of Benue, ex-governors Hassan Dankwambo of Gombe State, Ayodele Fayose of Ekiti State and Donald Duke of Cross River State, among others.

The source said that concerning what transpired between Atiku and Wike, “You can also crosscheck what I will tell you from the camp of the ex-VP. Following the euphoria of winning the primary, Atiku visited Wike to seek his support,

“He promised to make him a vice presidential candidate. Wike said he does not want the office, but that Atiku should consider ex-Governor Donald Duke. Atiku and his supporters prevailed on Wike to be his running mate.

“There was much pressure on Wike to agree to the offer. A 17-man committee was also set up by the leadership of the party and 14 of the 17 members recommended Wike as Atiku’s running mate.

“The party leadership later raised a kangaroo committee (with Ayu as a member), which claimed that the party can only recommend three candidates to Atiku to pick. And it was obvious to Wike and his team that there was a predetermined candidate.

“You can see the lines of insincerity and lack of faith in talks. This explains why Wike shut his doors against Atiku.”