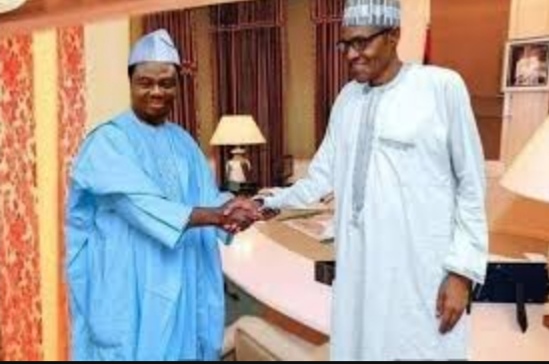 The National Youth Council of Nigeria ( NYCN) wishes to bring to the attention of the President, Federal Republic of Nigeria, His Excellency Muhammadu Buhari; the Minister of Justice and Attorney General of the Federation, Abubakar Malami (SAN); the Secretary to Government of the Federation, Boss Mustapha, the Honourable Minister of Youth and Sports Development, Mr. Sunday Dare; and the general public of its position regarding the statement credited to one Mr Solomon Adodo published in the Youth House Reporters on 25th September, 2021.

NYCN dissociates itself from the said statement and as well refute, vehemently, the spurious and malicious allegation raised by Adodo therein against the person of the Honourable Minister of Youth and Sports and Development, Mr. Sunday Dare, the Ministry of Youth and Sports Development and the Leadership of NYCN.

According to the Statement by National Youth Council Of Nigeria, NYCN.

Mr. Solomon Adodo is an impostor, who has been parading himself as the president of NYCN despite subsisting judgments of the FCT High Court, delivered by Justice O. A. Musa on 12th, August 2020 suit number FCT/HC/BW/CV/181/2020 subsequently upheld by Court of Appeal presided over by Justices Stephen Jonah Adah, Yargata Byenchit Nimpar and Mohammed Baba Idris in suit number CA/A/701/2020 on 16th February, 2021 confirming Amb. Sukubo Sara-Igbe Sukubo as President and not withstanding his (Mr. Solomon Adodo) criminal trial before the court of law for impersonation of the Office of the NYCN President, extortion and obtaining by false pretense amongst others.

Mr. Solomon Adodo is a classic example of a ‘drowning man clutching at a straw’ is aggrieved at the Minister for failing to accord legitimacy or recognition to his illegitimate and charlatanic quest/actions.

To dispel the deliberate falsehood churned out by Mr. Solomon Adodo on the said publication and to put the record straight, we are constrained and obligated to detail the true position as follows:
(1) Mr Solomon Adodo is not the President and never has been the President of the NYCN. He has no record of membership and cannot show any evidence of being elected to the position of the NYCN President. He is a rubble rouser who has been hell bent on causing disunity and crisis for the NYCN.

The leadership of the NYCN who has on several occasions dissociated itself from Solomon Adodo and his cohorts, gathered that the National Commandant of Peace Corps, Mr Dickson Akoh and the orchestrated machineries of disgruntled politicians and enemies of the Buhari Government is allegedly sponsoring and bankrolling Solomon Adodo and his cohort to cause disaffection within the NYCN and discredit/sabotage efforts of the Federal government.

(2) Mr Solomon Adodo assertion/claim of going through some challenges to remain the NYCN President is preposterous and a calculated attempt to whip up sentiment and deviate from the truth. He has continued to parade himself as the NYCN President with total disregard and contempt of court Judgments to wit Suit No. FCT/14/BW/CV/181/2020 and CA/A/701/2020 wherein both confirmed and reconfirmed that having been duly elected in accordance with NYCN Constitution, Amb Sukubo Sara-Igbe Sukubo remains the President of NYCN.

Amb. Sukubo Sara-Igbe Sukubo emerged the President of NYCN through a unified consensus endorsement of the different factions within the NYCN and thereafter ratified by the extra-elective congress held at Calabar. Therefore, the claim of imposition of stooge(s) on the Youth by the Honourable Minister of Youth and Sports Development and Ministry’s officials is a blatant falsehood.

(3) Your Excellency Sir, Mr President, NYCN is not oblivious of the immense benefit of your directive that Twenty-five Billion Naira-National Youth Investment Fund (NYIF) be disbursed yearly. We therefore commend the Federal Government, Ministry of Youth and Sports Development (MYSD), Central Bank of Nigeria and other Government Agencies involved in the disbursement of the NYIF for the transparent manner of the process.

(4) The claim by Mr Solomnon Adodo that there is yet to be any productive beneficiary of the fund, alleging misappropriation of the Fund exposes not just his acute ignorance of the process but also, a manifest desperation to cast aspersion on anything and any person that does not gratify his and his cohorts’ inordinate desires and ambitions.

(5) The report of the process, procedure and beneficiaries are displayed on portal and website of the MYSD for the ready reach of the public. It is not a hidden information that over 5000 persons have benefited from less than twenty-five billion naira disbursed. Yet out of seventy-five billion naira earmarked for this 3year process, three billion naira and not twenty-five Billion Naira has been released for the first Year, 2021. NYCN and its leadership has no role in the disbursement of this fund to warrant her misappropriation/misapplication of the fund or conniving with anyone to misappropriate the fund.

(6) It is imperative to note that: the entirety of the serial spurious publications by Mr Solomon Adodo is déjà vu. The reign of crisis having been dislodged and dealt a final blow is now seeking for re-enthronement through the back door of malicious distortion of fact, misrepresentation, and misdirection of clear position of the court and engagements of the NYCN. Gone are days of NYCN’s crisis riddle and divisive pre-occupation! Let the new doom of progressive and purpose-oriented Youth body reign.
To this effect, the Security Agencies to wit DSSS, Nigeria Police etc as ever, need to switch on the red alert on the brewing pointers disguised as cries and masqueraded wailings for the alleged misapplication of Seventy-five Billion Naira Youth Investment Fund.