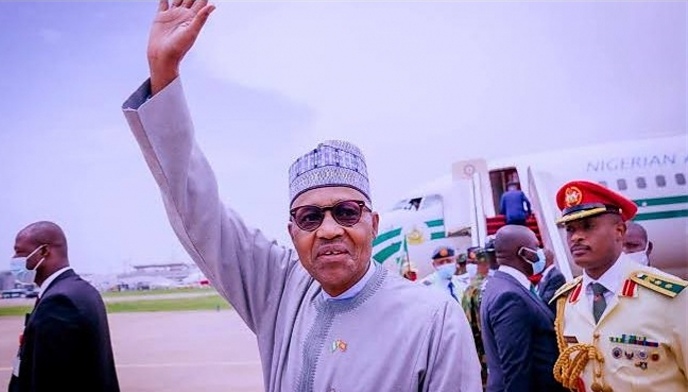 The President is getting set for the trip amid the high wave of attacks in the last 24 hours.

Bandits opened fire on a convoy of his advance team in Katsina on Tuesday.

The team was heading for Daura, the president’s hometown when bandits ambushed them.

In yet another Katsina attack, an Assistant Commissioner of Police, was gunned down.

Hotmedia.ng had earlier reported that the Minister of Defence, Bashir Magashi, had said all Boko Haram suspects in custody escaped during the attack.

In a statement on Wednesday, Senior Special Assistant to the President on Media and Publicity, Garba Shehu, said Buhari will be accompanied on the trip by the Ministers of Foreign Affairs, Geoffery Onyeama; Finance, Budget and National Planning, Zainab Ahmed; as well as Industry, Trade and Investment, Adeniyi Adebayo.

Others on the entourage are : the Governor of the Central Bank of Nigeria, Godwin Emefiele; Director- General, National Intelligence Agency (NIA), Amb. Ahmed Rufa’i Abubakar; Director-General, Debt Management Office, Patience Oniha; and the Managing Director of the Bank of Industry, Olukayode Pitan.

He said IDA is an institution of the World Bank Group, deepening its support to drive a resilient recovery for countries hit by the global crises of climate and COVID -19, growing levels of insecurity and more recently, by the impact of the war in Ukraine through its historic $93 billion 20th replenishment cycle (IDA20) which goes into effect between July 1, 2022 and June 30, 2025.

According to Shehu, at the High Level event slated for Thursday, July 7 and hosted by President Macky Sall of the Republic of Senegal, President Buhari is expected to join other African leaders in an open Dialogue on Development Challenges and priorities as well as transformational initiatives that will lead to an outcome document, the Dakar Declaration.

The presidential spokesman said this commitment is expected to chart the way forward for the transformation of the economies of these nations in partnership with the World Bank/IDA.

According to him, “Topics slated for discussion include: Financing for Recovery and Economic Transformation in Africa; Agriculture, Livestock and Food Security; Human Capital; Digital and Technological Innovation; and Energy Transition and Climate Change.”