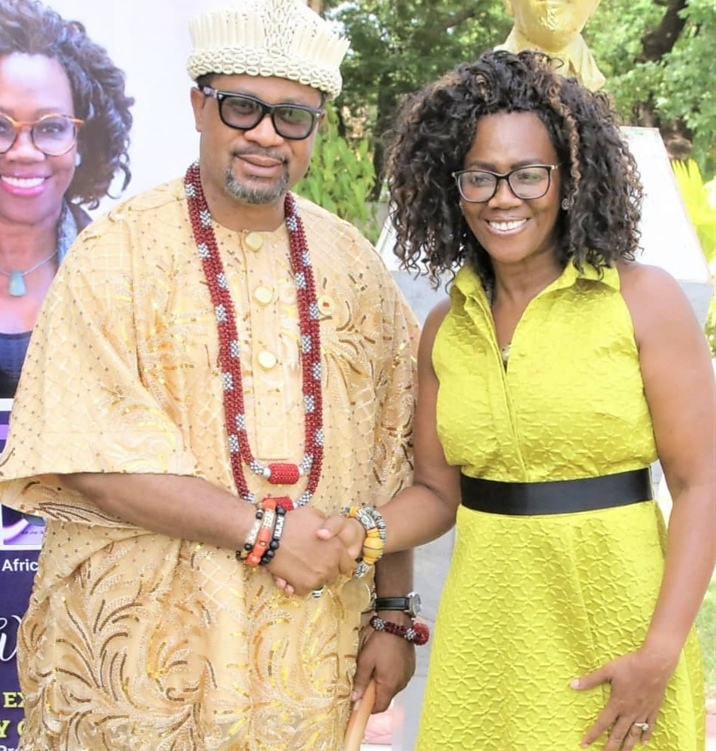 As a follow up to the unveiling of the African 6th region flag in Accra Ghana, the Paramount King of the Igbo in Ghana, HRM Eze Dr.Amb Chukwudi Jude Ihenetu with  Ambassador Diaspora Forum, Her Excellency, Dr Erica Bennet along side Her Excellency Claudia Turbay Quintero, Colombia Ambassador to Ghana on 22nd April 2022 received Vice President of Costa Rica, Her Excellency   (Barr. )Mrs. Epsy Campbell and Her Excellency Dr.Natalia Kanem( UN Under-Secretary-Gerneral  and Executive Director of the UN Population Fund (UNFPA) on their courtesy visit to the DAF Embassy in Accra Ghana.

“Campbell has been active in Afro-Caribbean affairs since entering politics. In 1996, she founded the Women’s Forum for Central American Integration, which she coordinated until 2001. Concurrently, she also coordinated the Network of Afro-C

“Previously, she served as founding president of ELMA Philanthropies,Inc., senior associate of the Lloyd Best Institute of the West Indies, and as Ford

Foundation Deputy Vice-President for peace and social justice programmes in Africa, Asia, Eastern Europe, Latin America and North America. Dr. Kanem holds a medical degree from Columbia University in New York, a master’s degree in Public Health, with specializations in epidemiology and preventive medicine, from the University of Washington in Seattle and a bachelor’s degree in history and science from Harvard College.

On what African Diaspora stand to gain from the arrangements, the Umuduruoha Amigbo Nwagele Imo-State born Royal father, HRM Dr Ihenetu said  the Africa’s 6th region will open room for cultural exchange and cross-fertilization of ideas to move the continent foward.

While tracing the origin of the sixth Region of Africa from its inception till date,  Amb. Erieka said records shows that 17 years ago, precisely in 2003,  former Ghanaian President, John Kofi Agyekum Kufuor and his delegation attended The AU Summit held in Durban, South Africa.

Discussions surrounding the state of African Affairs and the means of progress was on the table when  Dr. Erieka Bennett, a Diaspora residing in Ghana, asked  ex-President K

ufour about the role of the Diaspora in the development of Africa and her future. This profound question sparked a nerve and President Kufour was moved to recommend to  the President of the Commission at that time,  former President  of Senegal, Abdoulaye Wade,that the Diaspora as a constituency and resource, must be included in all considerations regarding the progress of Africa. So, moved by the enormity of the prospect of the support and importance of the millions of  Africa’s  children residing outside of Africa, ex- President Wade echoed the sentiment and declared to the floor of the general assembly that the Diaspora should be considered the “6th Region of Africa”.

History will record that at that seminal moment in the womb of time,  Dr. Bennett’s question, answered by ex-President Kufour’s suggestion to President Wade, gave rise to the concept and principle of “The Sixth Region of Africa”. It is now cited in scholarly journals and is for a  certainty a  recognized and respected designation for the Diaspora.   The Sixth region designation  recognizes that the Diaspora  are part and parcel of the present and future of Africa.