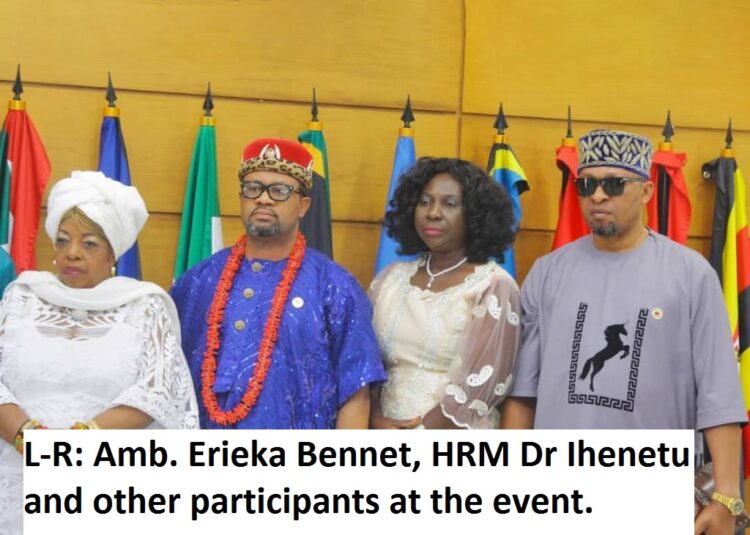 In an emotional and historic ceremony at the Africa Continental Free Trade Area (AfCFTA) Secretariat in Accra, Secretary General HE Wamkele Mene hosted the flag of the African Union’s Sixth Region.

As part of efforts to project Nigeria culture and values in the Diaspora, the Paramount King of Igbo in Ghana and the Assistant Publicity Secretary Association of Ndieze Ndigbo in the Diaspora, HRM Eze Dr. Chukwudi Ihenetu on the 4th of April 2022 alongside other dignitaries witnessed the hoisting of Africa 6th region flag at the African Continental Free Trade Area (AFCFTA) secretariat, Accra, Ghana.

In attendance were the deputy Minister of Trade and Industry Hon. Herbert Kraba, the original instigator of the Sixth Region, Ambassador Erieka Bennet of Diaspora Africa Forum, and the designer of the 6th Region Flag Professor Kwame Addo.

Ambassadors and Head of missions from Colombia, South Africa, Mali, Libya, UAE , and United Nations were also on ground to grace the occasion.

In his speech, after hoisting the flag as quoted by a Ghanian on-line media, DNT News, Secretary General Wamkele Mene stressed that beyond the emotional speeches, Africa must now shift into the next gear and get in the business of actualizing intra-Africa trade.

Mene revealed that plans are far advanced to facilitate the intra-Africa trade with local currencies.
A trade summit between Africa and the Diaspora to be held in St. Lucia in the Caribbean is also coming up.

He recalled that African Union’s Sixth Region was initiated at an OAU meeting where the member nations voted to change the name to African Union. At that meeting, Ambassador Erieka Bennet approached Ghana’s ex- president John Agyekum Kufuor to remind him of the potential role that Africa’s Diaspora can play in the quest to achieve the organization’s objectives.

President Kufuor immediately saw wisdom in the suggestion and relayed the proposal to the then Senegalese president Abdulai Wade who was then chairman of the African Union. The motion was tabled and the member nations voted to officially make the African Diaspora the Sixth Region behind, West Africa, North Africa, East Africa, South Africa, and Central Africa.

On what African Diaspora stand to gain from the arrangements, the Umuduruoha Amigbo Nwagele Imo-State born Royal father, HRM Dr Ihenetu said it will open room for cultural exchange and cross-fertilization of ideas to move the continent foward.