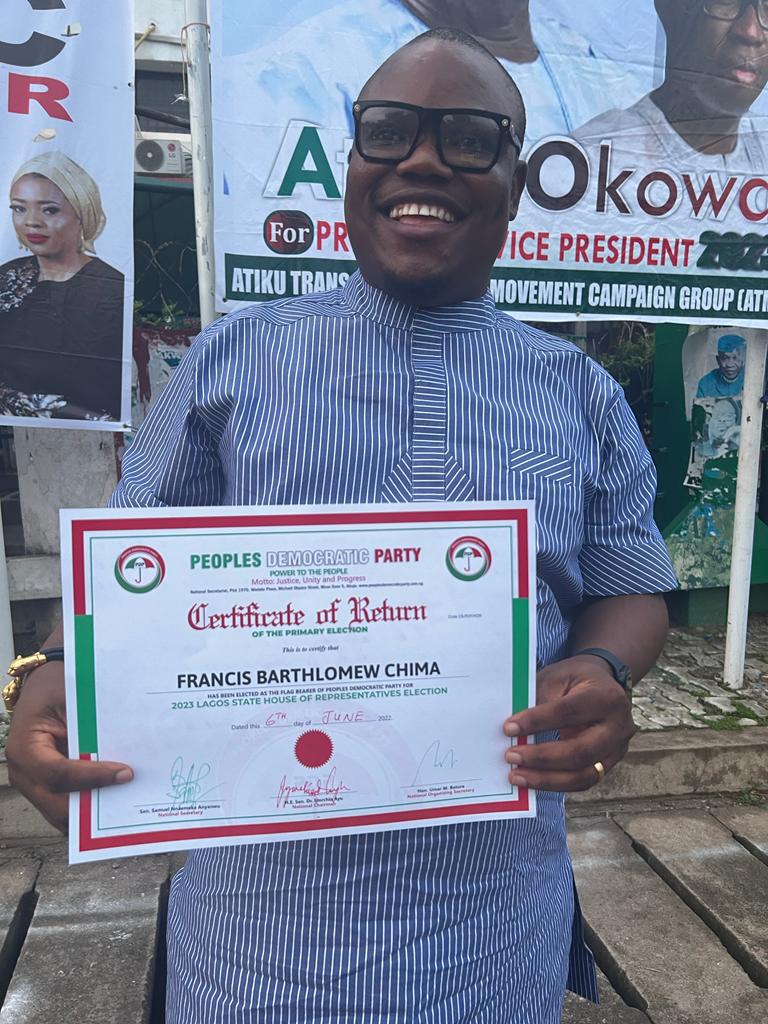 Hon Francis Bartholomew Chima aka OmoBarca, the Peoples Democratic Party candidate for House of Representatives in Ajeromi Ifelodun constituency of Lagos State has sued for peace and unity among party members.

OmoBarca who has received his Certificate of Return has started making reconciliatory moves to ensure that PDP emerges victorious in the forthcoming 2023 election.

To this end, he has appealed to a former House of Reps member in the constituency, Hon. Rita Orji and other Aspirants including Hon. Diriwari Oladipupo Wilson and Hon. Emilia Ezeude and all other aggrieved party chieftains to bury the hatchet and embrace peace for the growth of the electorates in Ajeromi Ifelodun.

OmoBarca who is still battling court cases within and outside the party has assured his supporters of victory at the polls, having received their mandate to move the constituency forward,

He has also promised to accommodate Hon Rita Orji despite her press release urging PDP members to shun invitation to a reconciliatory and peace meeting on Saturday.

PDP leaders and executives are hereby invited to attend the meeting scheduled to hold on Saturday 7th August. 2022 at the party Secretariat in Ajeromi Ifelodun for peace and reconciliation.

OMOBARCA the Candidate of the Party in Ajeromi Ifelodun Federal Constituency for House of Representatives has in recent days reached out to the LGA chairman Apostle Matthew Abogunde and notable party leaders including Are Tajudeen Balogun the PDP LGA chairmanship Candidate for the local council election in 2021 in his quest to foster peace and reconciliation for all aggrieved members.

Most recently the PDP leaders and LGA Excos in their quest to promote peace, unity and progress for the party in the LGA has deemed it fit to organize a PDP Ajeromi Ifelodun LGA General Assembly for all party members to hold tomorrow at the LGA party secretariat at Ligali bustop Ojo road Ajegunle Lagos. This is aimed at positioning to the party for victory in the forthcoming general elections in 2023.