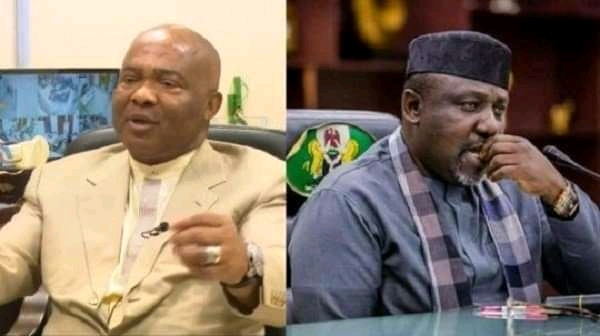 The Imo State government have accused former Governor Rochas Okorocha of being behind Monday’s attacks on the police command headquarters and the correctional centre.

Imo Commissioner for Information Declan Emelumba claimed the former governor engaged thugs whom he had granted amnesty to unleash violence on the state.

He said the aim was to force the Federal Government to declare a state of emergency in Imo.

Uzodimma had on Wednesday, while speaking on Channels, blamed aggrieved politicians for the attacks, but he did not name anyone.

Emelumba said Okorocha sponsored some northern youths who called for the declaration of a state of emergency in Imo barely hours after the attacks.

He alleged that the former governor wanted to get back at Uzodimma for insisting on the implementation of the White Paper that indicted the Senator for alleged looting and land grabbing.

“Recall that the man had gone to court to stop the commission from sitting. When that failed, he approached Governor Uzodimma to disband the panels.

“When that failed, he resorted to violence to repossess property government had sealed. That is the motive for the attacks,” the commissioner said.

According to him, Monday’s attacks were orchestrated to portray Uzodimma as an incompetent governor.

Displaying a purported copy of a press statement by the northern youths where they castigated Uzodimma but praised Okorocha, Emelumba said it was not rocket science for people to know the person behind the attacks.

He added that it was not a coincidence that the former governor had not condemned the attacks.

“How come the former governor is not condemning the attacks if not because it is his brainchild?” the commissioner asked.

Emelumba said the government had information about how a special adviser to the former governor procured the thugs who invaded Owerri on Monday.

Read Also : Terrible: Photos Of A Woman Selling Human Meat In Her Restaurant Was Caught By Police In Anambra.

Okorocha, who represents Imo West Senatorial District, said Uzodimma should rather seek his counsel on how to deal with criminality.