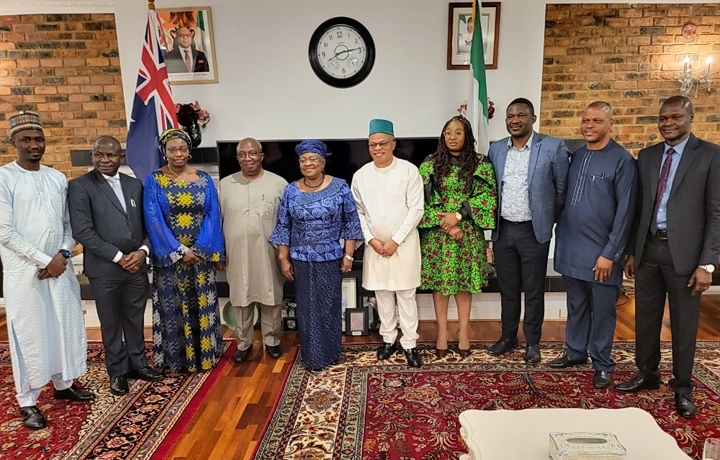 The High Commissioner of Nigeria to Australia and the Pacific Region ,Amb. Anderson N.Madubike,has again noted the need for African countries to deepen trade engagements with Australia. This,he added, would make for a win-win situation in relations between the countries of the two regions.

Amb. Madubike,who stated the above in Canberra, Australia,on Monday during a dinner he organised for the Director General of the World Trade Organization, Nigerian-born Dr. Ngozi Okonjo-Iweala and members of her delegation,who were on an official visit to Australia,added that Africa and Australia must strive to realize the potential each of the regions possessed in trade,raw materials and in other areas like education and cultural exchange.

The Nigerian Envoy also noted that Africa still lags behind in both trade relations and in other areas of foreign policy engagements,hence the need to close the yawning gap to realize better results.

Dr.Ngozi Okonjo-Iweala,who was in Australia as a guest of the Australian Government,was alongside her team received by the High Commissioner of Nigeria and the staff of the High Commission in Canberra, Australia.They were also joined by some members of the Diplomatic Community,the Nigerian Association as well as other friends of Nigeria.

Discussions of the visiting DG’s delegation were centred around international trade and the central role the WTO plays in regulating rules in the international trade system and how Australia could work with the organization to implement the historic outcomes of the 12th WTO Ministerial Conference held earlier in June 2022.

As the main purpose of her visit,Dr. Okonjo-Iweala delivered a lecture at the Lowy Institute, Sydney,where she spoke on the concept of Reglobalisation,Interdependence without Overdependence and Sustained Efforts on Multilateralism for the Growth of World Economy. In her paper,she further advocated that Trade should be a tool for economic inclusion and support and for bringing new countries and communities into global value chains.