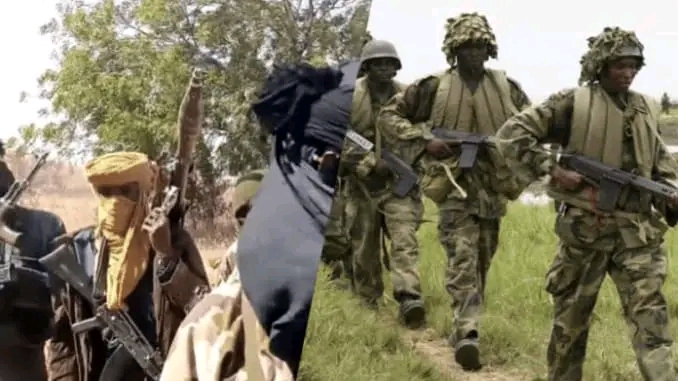 Scores of passengers were reportedly abducted, weekend, by kidnappers suspected to be herdsmen, who blocked the Enugu-Port Harcourt highway between Leru junction and Ihube axis.

It was gathered that the gunmen, numbering about 30, abducted the entire occupants of three buses.

The bandits said to be heavily armed were said to have attacked a team of soldiers drafted to the scene following a distress call.

They reportedly set the military van on fire and wounded two soldiers before herding all occupants of three buses they abducted into the bush.

A youth leader in Umunneochi, who spoke with Vanguard, yesterday, said the situation had heightened anxiety in the area.

He said the bandits took advantage of the evening rain on Saturday to block the highway, causing gridlock that stretched to Leru junction as commuters mistook them for policemen on the roadblock.

According to him, some of the commuters who had alighted to verify the cause of the gridlock took to their heels when the bandits opened fire on a military van that came to save the situation.

He said some people sustained bullet wounds as motorists abandoned their vehicles and scampered for safety.

Kidnapping for ransom has assumed a nightmarish dimension around the vicinity since after the abduction of the Prelate of Methodist Church, Dr Samuel Uche, and two clerics on his entourage.

Contacted, Commissioner for Information, Abia State, Eze Chikamnayo, who also doubles as the Secretary of Umunneochi Security Committee, recently inaugurated by Governor Okezie Ikpeazu to tackle the menacing security challenges in the area, confirmed there was an abduction in the area weekend.

He, however, said the incident took place at the Imo State side of the expressway, and begged for more time to be able to give accurate information on the casualty figure.

His words: ”It happened at the expressway between Ihube and Umunneochi. In Umunneochi proper, there has been a mass reduction in the number of such incidents but they have migrated to the border between Umunneochi and Imo State.

“But Umunneochi Security Committee worked very hard. We are putting checkpoints and we have strengthened our vigilante, and have potentially repelled them.

“I think it’s a sign of victory for us that they have left Umunneochi LGA and migrated further towards the express. They are at the boundary between Abia and Imo, precisely at Ihube.

Efforts to get a response from the Army were unsuccessful as the Army Public Relations Officer, 14 Brigade Ohafia, Lt. Innocent Omale, said he was in a conference when he was contacted.

Contacted, the Police Public Relations Officer in charge of Abia State, Geoffrey Ogbonna, did not pick up calls put across to him, but the Zonal PPRO in charge of Zone 9, Israel Jack Rabin, said the zone was not yet aware of the incident as his office had not received any situation report concerning such.