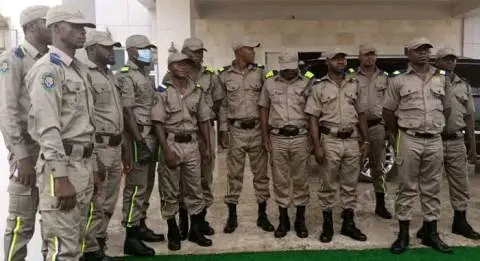 Operatives of the Ebube-Agu security outfit in Imo State have reportedly killed 14 young men returning from a traditional wedding ceremony in Awo-Omamma in the Oru East local government area of the state.

In a video which went viral on social media on Monday, residents of the community were seen crying, accusing the Commander of Imo State, Ebube-Agu security outfit, as the one behind the gruesome killing of the youths.

Read Also: In Abuja: Man Catches Brother In Marathon S3x With His Wife, Stabs Him To Death

In one of the videos seen by Our Correspondent, on Monday, tens of people were seen gathered around a Hiace bus that fell into a gutter, where the bodies of the victims were reportedly seen.

The people in the video were heard crying and calling for revenge, threatening to wipe out the family members of the Ebube-Agu Security outfit that participated in the alleged killings.

One the voices in one of the videos said, “Happening Live In Awo Omamma: The Security Outfit EBUBEAGU Is At It Again. Over 14 Young Men Coming Back From a Traditional Wedding Were Slaughtered On The Streets Of Awo (Awo-Omamma). I Can’t Share The Gruesome Videos. May God Give Strength To The Family Of The Victims.”

Another voice at the background said “Ogwu Mozambique of Amuri, Hope Uzodimma and Ebube-Agu people, this Ebube-Agu must end. We must put a stop to these Ebube-Agu atrocities; they are doing a very big harm in Awo-Omamma: Oru East and Oru West as a whole, killing our youths for no reason. Why?

“Ogwu Mozambique is the Commander of Ebube-Agu killing his brothers and sisters for no reason. Why? Why? A bandit from Mozambique, a terror, somebody they have marked as a terrorist in Mozambique; come back here and collect Ebube-Agu Commander.”

In another video which had also gone viral, a woman was seen lamenting the murder of the 14 young men, saying two of her husband’s children were gruesomely killed.

While calling for revenge, she vowed to tear the Ebube Agu Commander into pieces, describing him as no different from Islamic terrorists in Igbo land.

When a voice asked what happened, the woman who spoke in Igbo said, “Let us go for revenge, I will hold that man, I will tear him. Alas, 14 boys; they followed their friends to go for marriage ceremony; they were killed. Two children of my husband’s brother were killed – Chiboy and his brother. They are not criminals.

“People who went for traditional marriage that Ebube-Agu Operatives killed without committing any offence; they must pay for this murder. Everyone of them that has a hand in their killing must pay.”

Efforts by SaharaReporters to get reactions of the Imo State Police Command were not successful.

The Command’s spokesman, Mike Abattam did take his calls or respond to text messages.