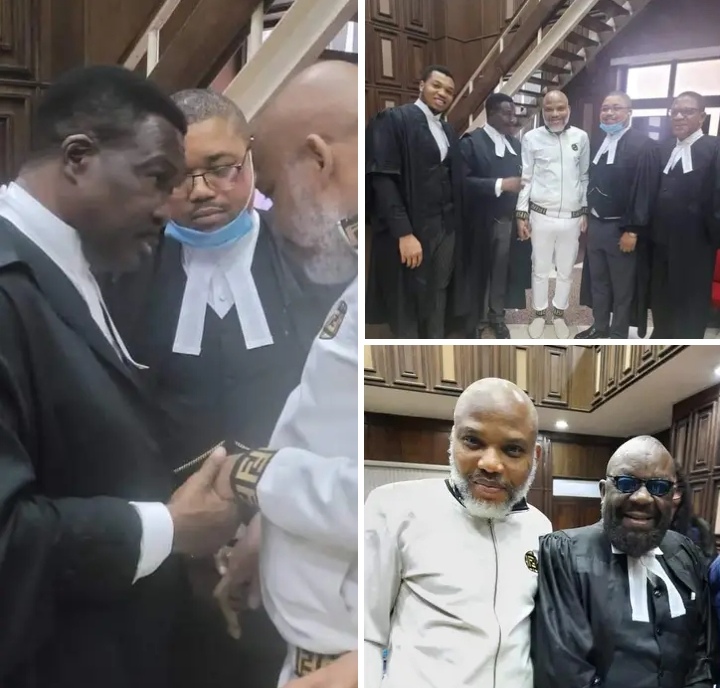 1. Recall that during His Lordship’s Ruling on our application for the bail of Onyendu Mazi Nnamdi Kanu, delivered on the 18th day of May 2022, His Lordship, Honourable Justice Binta Nyako, directed us to furnish him with information as to what led to the disappearance of Onyendu from September 2017 until June 2021.

2. His Lordship further stated that it is important that he inquire into the circumstances that occasioned the inability of Onyendu to be in Court to face trial during the above stated period.

3. His Lorship was promptly reminded by the learned Lead Counsel, Chief Mike Ozekhome SAN, that an application anchored on the bloody invasion of Onyendu‘s house on the 14th day of September 2017, which also clearly contained facts as verified on oath by Onyendu, has been pending in Court since the 1st April, 2019 it was filed, which application was promptly filed then by us, requesting the Court to vacate the bench warrant issued against Onyendu and consequently, vacate the order revoking his bail, on the ground that this far reaching order was made without jurisdiction in the absence of fair hearing.

4. The Court took about ten minutes to exhume this application from its record. Even when the prosecutor could no longer lay hand on the Counter Affidavit they filed, we magnanimously obliged them with a copy in our file, all in a bid to ensure that the application is heard, since His Lordship maintained that he will hear this application before finally revisiting the bail application, which he termed in her Ruling as being premature.

5. The aforesaid application to vacate the bench warrant issued against Onyendu on the 28th day of March, 2019, and the Order revoking his bail were taken on the last adjourned date.

6. The interesting part is that this application contained Onyendu’s direct account of the bloody invasion of his house on the 14th day of September 2017, genocidal massacre of over 28 innocent and unarmed civilians on that fateful day by the invading Soldiers, and his narrow escape by mere act of providence on that day. In law, direct evidence of the person who witnessed the incident is the best evidence which must be considered on the merit.

7. Also, recall that following the Ruling on our application challenging the jurisdiction of the Court to try Onyendu on the 15-count frivolous charge, His Lordship dismissed 8-counts in his Ruling and retained 7-counts. We promptly filed an appeal against the decision of the Court to retain 7-counts charge predicated on far reaching grounds that may not be enumerated here, but all considered compelling, cogent and convincing.

8. We have equally filed the Appellant’s brief, and promptly served same on the Federal Government of Nigeria, followed by application for accelerated hearing under the Court of Appeal (Fast Track) Practice direction. The appeal has now been adjourned to the 11th day of October, 2022, for hearing of the motion for accelerated Hearing.

9. Today, the Court delivered Ruling on our application to set aside the order revoking Onyendu’s bail, and consequently, refused same. Part of the grounds for refusing this application as culled from His Lordship’s Ruling among other grounds, was that there was no denial of fair hearing, and that we filed that application four years after.
Though the Court stated that we can bring a subsequent application with fresh facts, however, with greatest respect to my Noble Lord, the holding was not correct, because this application was filed on the 1st day of April, 2019, and not this year, which application the Court obviously avoided hearing from 2019 till it was called up at the last adjourned date.

10. His lordship was equally informed by the Learned Lead Counsel that in view of the fact that Appeal has been entered in the Court of Appeal on a Ruling which, substantially deals in its entirety with jurisdiction of the Court to try Onyendu. Also, coupled with the fact that if the Decision of the Trial Court is overruled, it will terminate the entire proceeding in this case before the Court, and consequently, the Learned Silk applied that further proceeding should be stayed.

11. The application for stay was granted and matter adjourned to the 14th day of November, 2022 for Mention, by which time, the Court of Appeal would have taken a decision, one way or the other, on the matter before it.

12. Our position to get this matter resolved at the Court of Appeal is that, three heads will be in a better position to thoroughly review the entire gamut of the case, as well as the frivolous nature of the remaining 7-counts amended charge viz-a-viz the gross violation of extant international and domestic laws in the  abduction of Onyendu Mazi Nnamdi Kanu in Kenya, and his consequent extraordinary rendition to Nigeria.

13. It is pertinent at this point to formally inform the World that through a counter affidavit filed in a sister Suit on the 31st day of May, 2022, which Suit we commenced against the Federal Republic of Nigeria, now pending in Court No. 5 in Suit No: FHC/ABJ/CS/462/2022 between MAZI NNAMDI KANU Vs Federal Republic of Nigeria & Anor., the Federal Government has admitted and consequently, verified on oath, their abduction of MAZI NNAMDI KANU in Kenya, and proceeded to further admit that upon his abduction, he was briefly kept in a security facility in Kenya before bringing him to Nigeria, among other far reaching admissions they made in their horrific abduction and extraordinary rendition of Onyendu Mazi Nnamdi Kanu to Nigeria. Other details will be left for the Court to decide.

At this juncture, we urge UmuChineke to remain calm and peaceful as they have always been, and in line with the admonition of Onyendu Mazi Nnamdi Kanu in Court today.

We believe most sincerely, that we will get Justice at the Court of Appeal, and it will happen soon. No stone shall be left unturned until Onyendu’s freedom is secured.

Thank you all most sincerely, for your support and solidarity thus far. Forward ever and backward never in our legal fireworks until victory is achieved.