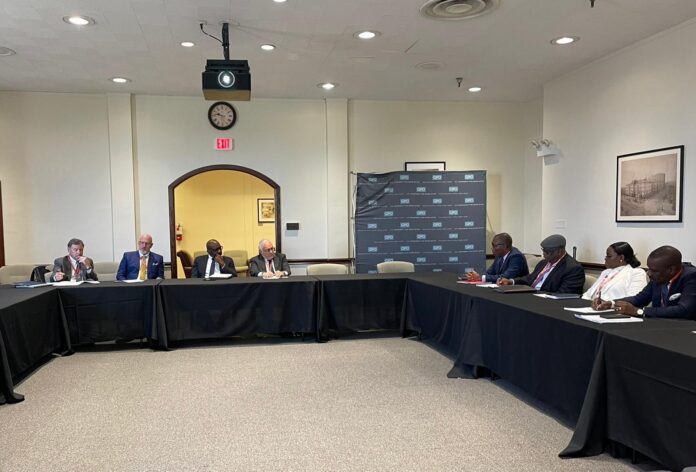 Ahead of 2023 Presidential election, Social Democratic Party’s, Candidate Adebayo honours invitation by US, to meet with govt officials, students

Factual Pursuit of Truth for Progress
The presidential candidate of the Social Democratic Party (SDP), Prince Adewole Adebayo, is currently in Washington DC on the invitation of the United States government.

Adebayo, who is among the leading candidates for the country’s most-coveted job, was invited to address the U.S. Commission for International Religious Freedom (USCIRF).

Created in 1998, the U.S. federal government commission reviews the facts and circumstances of violations of religious freedom internationally and makes policy recommendations to the President, the Secretary of State, and the Congress.

USCIRF Commissioners are appointed by the President and the leadership of both political parties in the Senate and the House of Representatives.

Addressing the commissioners on Tuesday, Adebayo said, “The United States is an important ally to my country. It is an honor to have this chance to make my case to the American people and seek ways to further build on our international relationship.”

The U.S. and Nigeria share close bonds with the African nation counted as one of the country’s most important partners in the entire continent. The U.S. is a principal foreign investor in Nigeria and two-way trade in goods and services typically exceeds $10 billion. Additionally, over a million Nigerians and Nigerian-Americans live, study, and work in the U.S.

And Adebayo believes his Presidency will further fortify ties between both countries.

“We have much to learn from each other and I am determined that, under an Adebayo presidency, we in Abuja will work with Washington for heightened mutual benefit,” he said.

Adebayo is expected to meet with ambassadors, State Department officials, university officials, and the National Black Chamber of Commerce, among others.

He is also scheduled to attend a national Presidential Prayer Breakfast committee luncheon in Arlington.