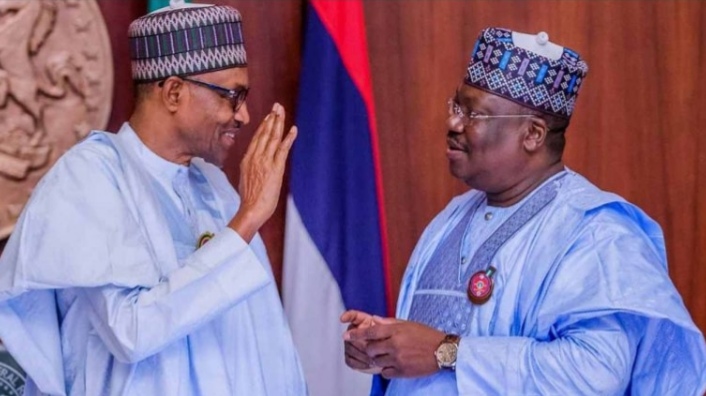 ….2023: Senate President, Ahmed Lawan Under Pressure from Northern elites to run for President..

Ahead of 2023 Presidential election, President of the Senate, Senator Ahmad Lawan may have bowed to pressure from Senators, the North East geo- political zone in particular and other parts of the north to vie for the Presidency as he will, this week, pick the Expression of Interest and Nomination forms on the platform of the ruling All Progressives Congress, APC, to contest for the Presidency.

A source told Hotmedia.ng correspondent that the President of the Senate had earlier slated Tuesday for the collection of the forms and declare, but shifted it to another day, and did same this week because of the public holiday that was declared by the Federal Government.

Hotmedia.ng gathered that Lawan decided to join the Presidential race following pressure from his zone, the North East geo- political zone in particular as well as Senators and very strong persons from the North.

According to the source, Lawan who hails from Yobe State was dragged in because he is a younger person from the North that the APC should produce in case the Peoples Democratic Party, PDP gives the ticket to former Vice President Atiku Abubakar who is also from the North East.

The source also said that there have been series of meeting at Asokoro, Maitama, Wuse2 and even during the Umrah when some powerful Senators and politicians went for Lesser Hajj in Saudi Arabia to brainstorm on the issue of Lawan.

It was also gathered that Lawan was drafted into the race since the North East has never produced a President except the North West.

According to the calculation by those behind Lawan, the North West had Produced late President Shehu Shagari from Sokoto State where a Presidential aspirant, governor Aminu Tambuwal hails from; the zone had produced late President Umaru Yar’Adua and the incumbent, President Muhammadu Buhari both from Katsina State, while Namadi Sambo from Kaduna State was a Vice President and the highest position ever held by the North East is Vice President and that was Atiku Abubakar from Adamawa, adding that except in the first Republic when Abubakar Tafawa Balewa from Bauchi State was the Prime Minister.

The permutation by the Elders and politicians from the North is that as a serving President of the Senate, he is more on ground politically and can get his supporters especially from the present Senate from the North Central, North West, South East, South South and South West.

The source also said that Lawan has been drafted into the race to pave way for a Northerner to retain the Presidency is against the backdrop that if the PDP zones the position to the South, the President of the Senate will be the one for the North and also for the reason that

the New Nigeria Peoples Party, NNPP where the former Kano State governor, Senator Rabiu Kwankwaso may not be very popular in the North even though the candidate of the party as a former Governor of Kano State is strong and popular.

The Northerners as gathered are rooting for Lawan in case the PDP did not go for Atiku Abubakar, but settle for either Tambuwal or Bala Mohammed from Bauchi State, just as the pressure group as gathered would meet with President Buhari to intimate him on the need for Lawan in order for the party to retain power and for Lawan to pick his vice Presidential candidate from the South East.

A Senator from the North who spoke with Hotmedia.ng correspondent said, ” We have succeeded in dragging the Senate President, Ahmad Lawan into the Presidential race to contest for the position and win. He is a young Northerner, a young Nigerian who is presently serving as the Senate President, he has been in the National Assembly since 1999 from the House of Representatives to the Senate. He has the experience, he has worked in very good and robust relationship with the Executive and the Judiciary, he understands governance.

“He will declare very soon, he would have bought his expression and interest forms on Tuesday, but shifted to a later day in the week. The forms would be purchased for him because people want him.”

Recall that  majority of the Presidential aspirants in the PDP are from the North while that of APC are from the South, except  Kogi State Governor, Yahaya Bello who is from the North Central. Some of the southern aspirants include Vice President, Yemi Osinbajo; leader of the APC, Asiwaju Bola Tinubu; Ekiti State governor, Kayode Fayemi; Governor of Ebonyi State, Dave Umahi; former governor of Ogun State, Senator Ibikunke Amosun; former governor of Imo State, Senator Rochas Okorocha; Minister of Transportation, Hon Chibuike Amaechi; Minister of Labour & Employment, Dr. Chris Ngige, and Minister of State for Education, Emeka Nwajiuba, among others.