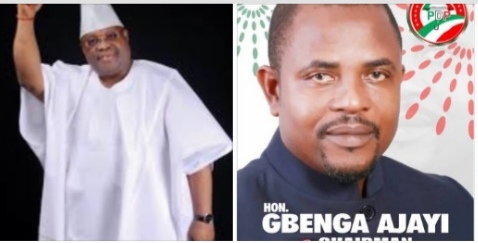 The President of Osun Youth for Good Governance And Democracy, Honourable Gbenga Ajayi has Congratulated the new sworn

In a press statement signed and released by himself, Senator Nurudeen Ademola Adeleke is God’s chosen leader and governor for the people of the sunshine state(Osun State).

According to the statement, Honourable Ajayi said this time is ripe with excitement as the servant leader is sworn in as Governor of Osun State.

Here is the time his excellency will work for the people of Osun State that elected him as their governor.

“I want to wish the governor, Senator Ademola Adeleke, the PDP and the good people of Osun the very best as a new administration under the PDP prepares to berth in Osun. I pray it will bring about the long-awaited turnaround for the state and its people.

Ajayi praised Adeleke for his steadfastness, hard work and commitment to the welfare of the people that earned him the victory now as the Governor of Osun State.

Gbenga noted that the people expected him to change the narrative by bringing positive changes to the sunshine state.

He urged Adeleke to sustain and improve his family reputation of excellence, dignity and leadership so that Osun could regain her glory under his administration.

I’m convinced that you will provide an enduring leadership for the people in appreciation for the massive support they have given you,” Gbenga said.

The Osun Youths under my leadership are looking forward to work with you, please accept as always, our assurances and considerations. Hon Ajayi said.

He further maintained that Osun State was a common heritage of all concerned which should be cherished, stressing, “the efforts at taking Osun to the next level should be a task for all.”