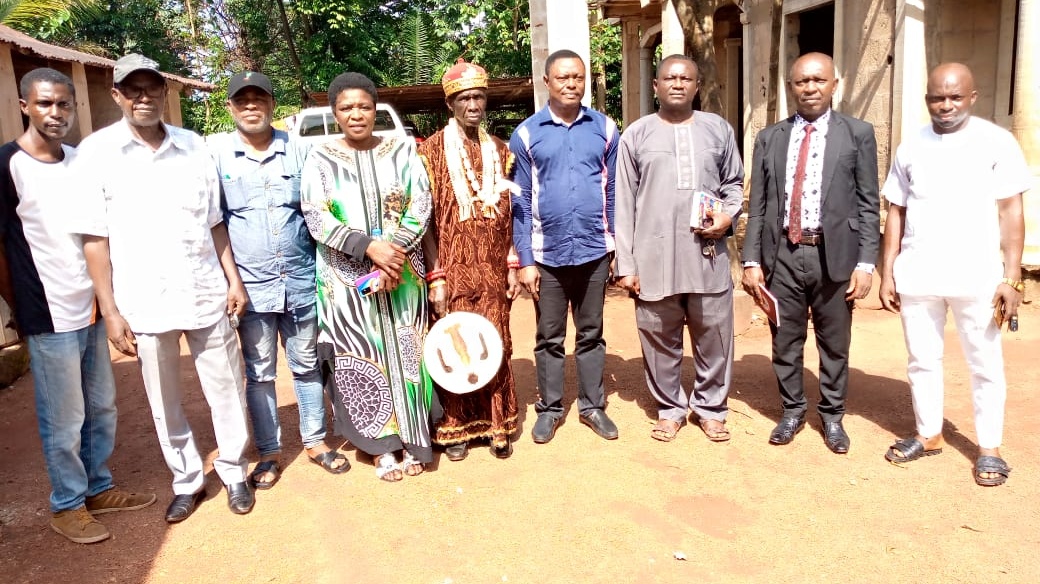 The committee on solid minerals in Ebonyi State meets with Ameka Community. The team led by the Principal Secretary to the Governor, Hon. Emmanuel Obasi today the 5th of November 2021 visited Ameka Community in Ezza South for a round table discussion to find a lasting solution to the gridlock between the Miners, the Community and the Government as it concerns illegal mining that has led to the  destruction of Government’s properties and other public utilities in Ameka community.

In a statement signed by Monday Okorie, Office of the SA on Solid Minerals.

Addressing the people, Hon. Obasi expressed satisfaction over the massive turnout of Ameka people as against the initial invitation to the Government House which many of them declined attending.

“We have come in peace because the present administration loves her citizens and will always want to protect their interest. Let those running away come back home and relax. We want you to know that Ameka is one out of One Hundred and Forty One Autonomous Communities in Ebonyi State and the Laws made by the State is for all the Communities including Ameka. The Government cannot make the Law which is anti people, it is for the good of all of us” Obasi said.

Hon. Obasi further made the people understand that the primary concern/duty of this Government is the protection of lives and properties of Ebonyi people and that the state Government is  Committed to that. “We cannot allow the blessings of God in our land to threaten or destroy our future due to  the illegal ways of harvesting them. Therefore we are committed to see that every mining activity in Ameka is done in the right and legitimate way and every illegal mining must stop. It is your wealth, it is your right but you must do it in the right way”. Obasi concluded.

The SA to the Governor on Solid Minerals Hon. Ozoemena Njoku who was among the committee read out the laws guiding mining activities in Ebonyi State to the people of the Community. He  made the Community to understand that the well-being of every Ebonyian is the major concern of the Governor of Ebonyi State His Excellency Gov. David Nweze Umahi and that is why he sent this delegation to dialogue with the Community.

“Ordinarily, the Community should have come to the Government but the Government is here today because of the humble and compassionate leader we have as a Governor. If you obey the Government by adhearing to all the law as enumerated here, you will have nothing to lose but so much to gain. We as a ministry have so many help to render to the miners to carry out their mining activities with ease so long their activities are legitimate. The illegal mining going on in Ameka must not continue. If you are operating as Cooperatives, come let us know you so that we can give you the necessary documents that will make your activities legal” Njoku added.

The Consultant Ministry of Solid Minerals Ebonyi State Mr. Obini Nweze who interpreted the law in Igbo Language to the people went further to advise the people especially the youths to always obey their leaders for the Community to move forward. “We are here for the progress of Ameka Community and you have to cooperate with us”.  Obini admonished.

The Traditional Ruler of Ameka Community HRH. Ezeogo Martin Oyibe (Ohabuenyi 1) decried the modus operandi of this illegal miners which has almost destroyed completely, the structures the community can boast of and is even threatening the future of the community. “All my efforts to curtail this malicious damage has  proved abortive”.  He however expressed his joy over the visit and thanked the government for coming to their aid.

The SA to the Governor on Education who incidentally is the son of Ameka lamented the devastating impact of this illegal mining on the education of the sons and daughters of Ameka, saying that their children no longer go to school. He expressed his elation that the government stepped in.

The Committee also moved round the Community to see thing for themselves and it was terrible, seeing the level of damage that these illegal activities has caused the Community and the Government because all the public utilities have been  damaged. The school, health center and even the major roads leading to the village are all in danger of complete destruction. The committee also, on one of the sites met some women and children engaged in local mining without any protective gear.

The Principal Secretary, Hon. Obasi proceeded to lecture these  women on the negative effects of what they are doing which may seriously endanger their health in the nearest future. He also promised to organize a kind of seminar on mining operations.

At the end of this meeting the following agreements were reached:

1. That all mining activities in  Ameka be suspended till further notice.

2. That all mining pits near public utilities like schools, health centers, roads and residential buildings be closed immediately.

4. That all the cooperatives mining in Ameka must come and identify with the ministry for proper registration so that the Government will know how to help them.

5. That a Committee be set up which her members must come from all the villages that make up Ameka Community. This Committee will be interfacing with the Committee from the ministry of Solid Minerals to carry out all the agreements reached by the Community and the Government to find a lasting solution to the issues of mining in Ameka Community. The Committee is to be set up as soon as possible as that will be in the best interest of all concerned.

It was on this note that  the meeting came to  a very fruitful end.