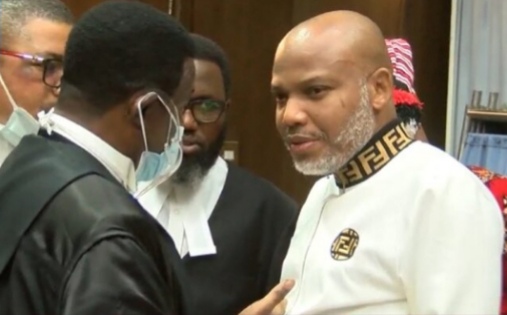 The Abuja Division of the Court of Appeal allowed the Appeal brought forward by Mazi Nnamdi Kanu challenging the jurisdiction of the trial Court.

The appellate court in a unanimous decision, faulted the process through which Kanu was brought before the Federal High Court to answer to a 15-count terrorism charges.

The National Security Council, earlier this week, stood by the Attorney-General of the Federation, Abubakar Malami SAN insisting that Kanu was not acquitted but discharged, further delaying his release despite calls from his lawyers and family.

Discharge and acquittal are terms under criminal justice system used to convey that an accused person has been exonerated from a criminal charge brought against him.

The order of acquittal is clearly to the effect that the accused is adjudged innocent by a court of competent jurisdiction. He is found not guilty and cannot be re-arrested based on the same subject matter.

A discharge means releasing an accused from custody due to unsubstantiated charges to proceed with the case. The accused can be re-arrested on admittance of new evidence or charges (i.e there is an element of guilt)

The Federal Government has filed seven grounds of appeal against the October 13 Court of Appeal judgment which discharged the leader of the Indigenous People of Biafra, Nnamdi Kanu.

It asked the Supreme Court to set aside the judgment and restore the charge against the respondent to be tried at the trial court.

The government, in a motion on notice in support of the appeal, is also seeking a stay of execution of the judgment of the court presided over by Justice Jummai Sankey, pending the hearing and final determination of its appeal, noting that the IPOB leader posed a flight risk.

The appellant averred that the appellate court erred in law when it held that the trial court had no jurisdiction to try Kanu because of “the extraordinary rendition of the respondent.”

It stated, “There was no evidence led by the respondent before the court of the first instance and indeed before the court below to show how he was allegedly abducted and rendered to Nigeria as required by Section 139 of the Evidence Act, 2011 since he alleged that he was abducted without following due process of law.”

The appellant also contended that the court below erred when it held that the executive arm must not be allowed to benefit from the abduction of the respondent “when in fact and by its judgment, the respondent was allowed to benefit from his illegality of disobeying the orders of the court when he jumped bail and was rewarded with a discharge from the charges pending against him at the trial court thereby occasioning a miscarriage of justice against the state and the victims of the crimes perpetrated by the respondent.”

The government claimed that the appeal court was wrong by saying that how Kanu was brought back to the country can vitiate and indeed weaken the criminal charges of treason, treasonable felony and terrorism brought against him.

It added that the lower court made that decision without taking into account the fact that the nature of the “entry’’ of the respondent is not relevant in the determination of the charges against him. 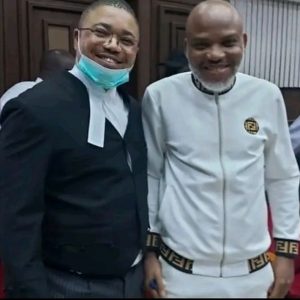 The appellant further stated that the appeal court justices failed to be bound by established judicial precedent on the mode of “entry” of a defendant charged with the commission of an offence established by the Supreme Court.

The appeal court, the FG noted, misdirected itself when it relied heavily on the Organisation of African Unions Conventions on the Prevention and Combating of Terrorism, the African Commission on Human and People’s Rights and cases decided from foreign jurisdictions as against the substantive law covering the criminal procedure in Nigeria.

“The court below overlooked the submissions of the appellant with regards to the ACJA, 2015 which takes its taproot from the grundnorm Section 36 of the Constitution of the Federal Republic of Nigeria 1999 (as amended) to the effect that it is the Administration of Criminal Justice Act, 2015 that governs the trial of every Nigerian charged with the commission of a crime, this failure occasioned the miscarriage of justice,’’ the appeal notice read.

The FG further argued that the court below erred in law when it discharged the respondent of the offences mentioned in counts 1, 2, 3, 4, 5, 8 and 15 bordering on terrorism offences contained in the amended charge dated January 14, 2022, and retained by the trial court for want of jurisdiction.

The appeal observed that the appellate court was completely silent and closed its eyes to the obvious fact of the issues which predate the rendition of the respondent because he was standing trial for conspiracy, and treasonable felony terrorism before his escape.

“If the learned Justices of the Court of Appeal had taken into consideration the act of illegality of the respondent in jumping bail and the corresponding duty of the appellant to ensure his presence in court, the decision of the court would have been different,’’ the appeal read.

In an affidavit, Loveme Odubo of the Department of Public Prosecution, Federal Ministry of Justice, stated that Kanu has a history of jumping bail and may be difficult to secure if the appeal was not granted.

The affidavit read, “That the respondent is a flight risk person given his previous antecedent of jumping bail while standing trial.

“The respondent is a dual citizen of both Nigeria and Britain which will make it easy for him to move out of Nigeria and escape justice. That the respondent’s presence will be difficult to secure should the judgment of the court below is not overturned and set aside by the Supreme Court.

Meanwhile, the South East Caucus in the Senate has intervened in the case of the Federal Government against Kanu, urging that the ruling by the Court of Appeal be obeyed.

In a statement jointly signed by 14 South-East Senators on Thursday, they advised the government against appealing the ruling at the Supreme Court but rather asked the Presidency to utilise the opportunity presented by the Appeal Court ruling and consider a political solution to solve the lingering problem in the interest of the country’s unity and peaceful coexistence of Nigerians.

The statement said, “This is the time to show magnanimity and statesmanship. The Appeal Court has provided the leeway for the authorities to walk the talk as ones desirous of preserving Nigeria’s unity and respect for her diversity.

“Accordingly, we as a Caucus and stakeholders in the Nigeria project, appeal to Mr President, to remember the promise he made to a delegation of elders of Igboland sometime ago and release Nnamdi Kanu.”