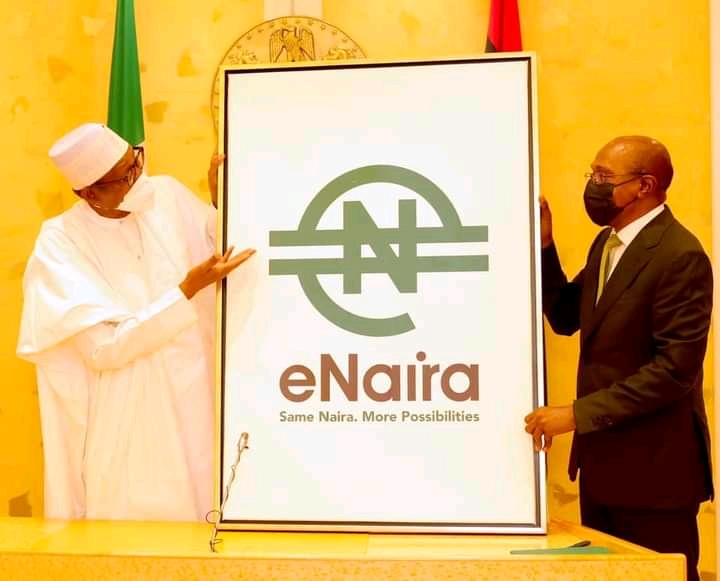 President Buhari during the launch said the adoption of new CBN digital currency is estimated to increase Nigeria’s GDP by $29 billion.

The event was held on Monday at the State House in Abuja, with the Vice President, Yemi Osinbajo; governor of the Central Bank of Nigeria (CBN), Godwin Emefiele, and other dignitaries in attendance.

During the launch, President Buhari said the adoption of new CBN digital currency is estimated to increase Nigeria’s GDP by $29 billion over the next 10 years.

“We have become the first country in Africa and one of the first in the world to introduce a digital currency to our citizens,” Buhari said at the event.

Other countries like China, Bahamas, and Cambodia have also launched digital currencies.

The digital currency has two applications – eNaira speed wallet and eNaira merchant wallet, which were launched on the Google Playstore and Apple Store on Monday at the State House, Abuja.

A statement on the eNaira website explained the overall function of the currency and its value to Nigeria’s economy.

“eNaira is a Central Bank of Nigeria-issued digital currency that provides a unique form of money denominated in Naira.

“eNaira serves as both a medium of exchange and a store of value, offering better payment prospects in retail transactions when compared to cash payments,” the statement read in part.

Additionally, the new payment system which has taken four years to crystallise, will drive financial inclusion, serve as a backbone for electronic payment in Nigeria and also enable the movement of more people from the informal to the formal sector, hence scaling up the tax base of the country.

The Central Bank of Nigeria has made transactions originating from the newly launched digital currency platform, eNaira free for 90 days.

But the bank said it will revert to its guide to charges by banks and other financial and non financial institutions.

The apex bank disclosed this in the framework titled, ‘eNaira Circular and Guidelines’ released on Monday.’

The news is coming after President Muhammadu Buhari launched the currency in Abuja on Monday.

The CBN said, “The charges for transactions that originate from the eNaira platform shall be free for the first 90 days commencing from October 25, 2021 and then revert to applicable charges as outlined in the Guide to Charges by Banks, Other Financial and Non-bank Financial Institutions.”