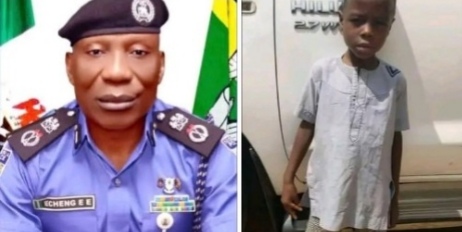 A Delta State High Court has sentenced the Anambra State Commissioner of Police and Kingsley Umeh to prison over refusal to comply with the order of the court to release a Kidnapped child to his parents.

In a suit No : HCO/44/2021 filed before Hon. Justice C.O Emifoniye  of Delta State High Court, the plentif, Pastor Henry Osah had urged the court to order the Anambra State Police Command to free his kidnapped child who was found in an orphanage home in Anambra State.

Delivering judgment judgment on Wednesday, December, 2022, Justice C.O Emifoniye ordered the Inspector General Of Police to arrest the Anambra State Commissioner of Police and Inspector Kingsley Umeh and transport them from Anambra State to the Kwale Prisons, Delta State within one week. 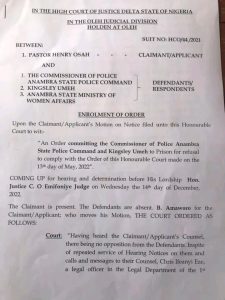 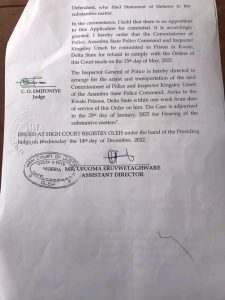 In 2021, Mr Osah accused the police of trying to swindle their recovered 4 years old son into an alleged imposter whom he said is a Hausa man.

According to Mr Osah, “I have passed through a lot, I have sold all my property but my son is still in captivity, help me to call on Nigerians to beg Nigeria Police to release my 4 – year -old son.

The media reports that the Gombe State police command on September 2019 unravelled a trafficking syndicate at Odimili, in Anambra State, following years of investigation into the adoption of about 10 children from the state.

According to police report, the children were recovered from an orphanage home in Anambra that is being managed by the alleged child trafficker, simply identified as Nkechi.

The media gathered that the then Gombe state police commissioner, Maikudi Ahamed disclosed to journalists that they recovered 12 children after a successful clampdown of the syndicate, adding the police will return the children back to their original parents after proper investigation and identification has been concluded.

However, in 2021, that’s over 11 months after , a couple in Delta, Pastor and Mrs. Henry Osah, who identified one of the abducted child as their son, are yet to be given their child.

According to Mr Osah, despite providing all necessary evidence and concluding all the means of identification, the police are yet to release the child to them.

Mr Osah alleged several attempts by the police to swindle their child to a Hausa man, adding that but for their parental relentlessness the police would have succeeded.

Speaking to Our correspondent, Mr Osah revealed what he has been passing through since the kidnap and discovery of the child.

According to Mr Osah, “My son was kidnapped at Emede community in Isoko South Local Government on July 19, 2019, and was seen among the 12 children that were recovered in Anambra state from a woman arrested at Odimili in Anambra state.

“In the morning, somebody invited me for prayers, so I left the house, then my wife was eight months pregnant. And you know because of her condition, she was weak and asleep, and somebody sneaked into the house without her knowing and whisked our child away. By the time she realized, she started calling me, and when I got to the house, we started looking for the child but he was nowhere to be found.

“When we could not find the child, I reported to the community leaders there, but was not comfortable with their response so I went to the police station, Oleh division to go and incident the matter. That was one step I took, but the DPO in that station said he cannot handle the investigation, he said they have to refer the case to Asaba, so they referred the case to Asaba, but police did not do anything in Asaba.

“On 2nd of September, 2020, it was a Tuesday, I was in the house, the younger sister to the mother of my wife called me from Lagos, that there are some children that they saw in Anambra, that I should go there. But I said, how will I go there; I don’t know anybody in Anambra, that I am not conversant with Anambra, she said yes, that there is a place called 33 stations, I was even thinking she was talking about television station, she said 33 stations, I went there, me and my wife, on our way she even tell us that heaven will smile at us.

When we get there, even the police when they saw the younger sibling, they said the resemblance was clear.

“At the station, the DPO, Bawa Sule called me and my wife, we were the first they screened, and they took pictures of us and asked us to wait. So we waited there in the police station.

“The DPO of 33 stations, Power Sule, brought out my son’s picture and was pointing it to me. He told me to go to Gombe, he asked if I had reported the case to the police, I said yes, he said to collect the necessary documents, he said to go to the division where you reported the case, collect extract and the necessary document, he asked me, do you have the birth certificate, I said yes, I have everything.

“When we were in Gombe, they brought an Hausa man that he is a father to my son, so we started that battle, they said we have to go for a DNA test because the Hausa man is claiming my child. Meanwhile, in the press brief that even the AIT covered, we were the ones they interviewed, they congratulated us, we were even on newspaper, after now, they said it’s a Hausa man.

I now asked the police, why did the Hausa man not come out to interrupt our interview with the press to say he is the child’s father? But they insisted that we must go for DNA. So I ran around, raised money, but unfortunately, the police did not do any DNA, they just falsify the result and give to us, that the child is not my child.

I said ok, no problem, I’m not a kid, I know my child, a child I gave birth to, two years-seven months, that I will not recognize him after one year. I ran to the federal ministry of women affairs, ministry of justice and begin to shout in Abuja before they now transferred the children back to Anambra state.

They brought the children back to Anambra towards the end of January this year. The children are still in Anambra now.

“When they came to Anambra, they now compel us to go for another DNA, we raised money, but the Delta State Ministry of Justice raised money and gave to them, they gave them N280, 000.

The police started telling us that they cannot see the result of the DNA, we said ok, if you didn’t see the result, let us do our own DNA, but they said we should wait, we now waited for six months.

“I am appealing to good-hearted and well-meaning Nigerians, NGOs to rise for me, the boy is a minor and they are oppressing him, he is too small to go through all these. I went there the other day, there were bruises all over his body because maybe the boy is not cooperating with them, what they are telling him to do.

Maybe they have told him to be running away whenever he sees us. I want Nigerians, notable organizations who can help us to rise on this matter because there are people who are behind it. I was discussing with a lawyer yesterday and he told me that there are strong syndicates who are following up in this matter from what he has seen and that is why I am begging Nigerians to help me.

Efforts by our correspondent to get the police reaction on the case proved abortive as calls and text messages sent to police investigation officer, IPO, in Anambra State, Kingsley Umeh were not answered. 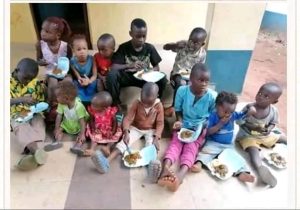 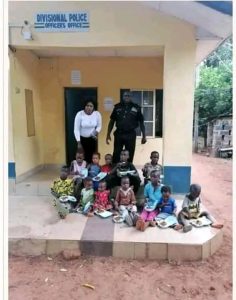