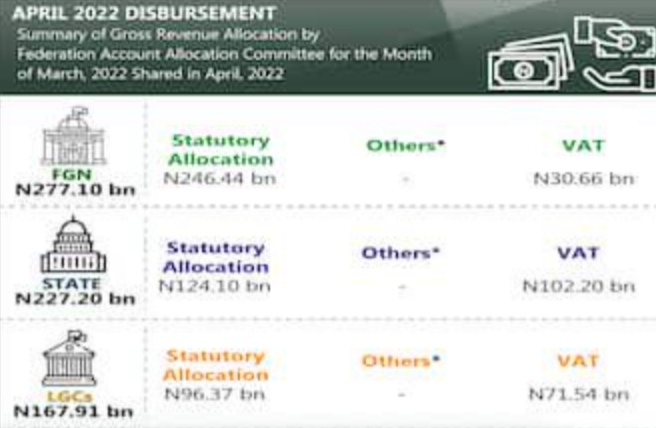 In the first five months of 2022, states, federal, and local governments shared over N2.4 trillion from the federation account

The funds were raised through taxation paid by Nigerians and businesses, as the NNPC refused to pay a single penny

The National Bureau of Statistics has revealed that the federal government, states, and local governments shared the sum of N3.3 trillion from January to April.

How the money was shared

A breakdown from NBS shows that in January  the three tiers of government shared N766.47 billion and N692.85 billion in February.

While N722.38 billion and N1.15 trillion was shared in March and April respectively.

The report also noted that the sum disbursed by the FAAC in a month is from the previous month revenue.

Giving a breakdown of how March revenue was shared in April the report reads:

“The amount disbursed comprised N933.30bn from the Statutory Account, and N219.50bn from Valued Added Tax (VAT).

The sum of N81.93bn was shared among the oil-producing states from the 13% derivation fund”

Further breakdown on revenue distribution showed in April the Federal Government of a total net amount of N149.70bn was disbursed to the FGN consolidated revenue account; N4.68bn was received as a share of derivation and ecology; N2.34bn as stabilization fund; N7.86bn for the development of natural resources; and N6.65bn to the Federal Capital Territory (FCT) Abuja.

States with the highest and lowest from FAAC in April 2022

Meanwhile, Legit.ng reported that Lagos State is leading the pack of 10 most indebted states in Nigeria followed by Ogun State with the highest domestic debts.

Domestic borrowings by the 36 states in Nigeria including the Federal Capital Territory rose by N272.23 billion in 2021 to stand at N4.46 trillion.

The data also shows that Lagos, Ogun, Imo states had the highest year-to-year increase in terms of the domestic debt profile.