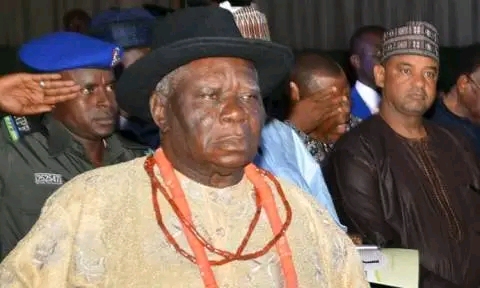 Elder statesman and the convener of the Pan Niger Delta Forum (PANDEF), Chief Edwin Clark, has criticised the nomination of Senator Kassim Shettima as the vice presidential candidate of the All Progress Congress, APC.

According to Clark in a statement on Monday, the action of the former Lagos State Governor, Bola Tinubu, in appointing a Muslim to run with him, even as a Muslim in a multi-ethnic and multi-religious country, threatened Nigeria as a country.

Clark asked if the action of the APC Presidential Candidate were not pointers to the confirmation and actualisation of such rumours to islamise Nigeria as a country.

The elder statesman who is the leader of the Southern and Middle Belt Leaders Forum (SMBLF) lamented that with a very sharp division presently in the country, Tinubu’s action and that of the APC would further worsen the situation in the country.

“I feel threatened for our beloved country because of the way things are going. Nigeria is a multi-ethnic and multi-religious nation, with Christianity and Islam as the major religions, even though Nigeria is a secular state.

“In compliance with Constitutional provisions of inclusiveness, the number one and number two positions in the country, viz President and Vice President have always been occupied by practitioners of the two major religions, to ensure balancing.

He also noted that Tinubu could not be the vice presidential candidate to Buhari in 2015 because of the Muslim-Muslim ticket which was confirmed by Tinubu in Abeokuta, Ogun State.

“It will be recalled that the Presidential candidate of the All Progressives’ Congress (APC), Alhaji Ahmed Bola Tinubu, could not be chosen in 2015 as Vice President to Muhammadu Buhari, because he is a Muslim and Muhammadu Buhari is a Muslim. Alhaji Ahmed Bola Tinubu, in his own words confirmed this in his statement in Abeokuta, Ogun State. What has changed? One quality of a good leader is consistency.

“A good leader must act in the same way at all times, to all people. He must not display double standard. Today, what has the Presidential candidate of the APC, Alhaji Bola Ahmed Tinubu done? He has picked a person of his religion, a Muslim, as his running mate. Such choice is not inclusive; it is not good for a secular state like Nigeria.

“There is presently a sharp division in the country, even on religious lines, and all patriots are seeking ways to salvage the situation. Therefore, Alhaji Tinubu’s decision to take a fellow Muslim as his running mate will further worsen the situation in the country. He should know that patriotism is a quality of a good leader.

“On the reasons adduced by Alhaji Tinubu on why he chose Kashim Shettima as running mate, is the APC Presidential Flag bearer telling Nigerians that there are no Christians in the APC from the north who are “competent, capable and reliable?”

“There are rumours of an attempt to islamise the country. Are all these pointers to the confirmation and actualisation of such rumour. One needs to bear in mind the antecedents of the major backers of Alhaji Ahmed Tinubu’s ambition, which include Nasir Ahmad el-Rufai, the Governor of Kaduna State, Abdullahi Umar Ganduje, the Governor of Kano State, and the chosen one – Kashim Shettima.

“Both the Governor and Deputy Governor in Kaduna State, are Muslims. A blatant action by the Governor, Nasir El-Rufai; unfortunately, the APC gubernatorial candidate for the 2023 election, is following suit. Is there a deliberate move of making Kaduna an Islamic state?

“Unconfirmed statistics put the ratio of Christians and Muslims in Kaduna State as 50/50; some statistics even put it as 55% for Christians and 45% for Muslims, yet Nasir el-Rufai, despite complaints and agitations by people not only from Kaduna State, but from the entire country, “decided” to pick a Muslim as his Deputy,”