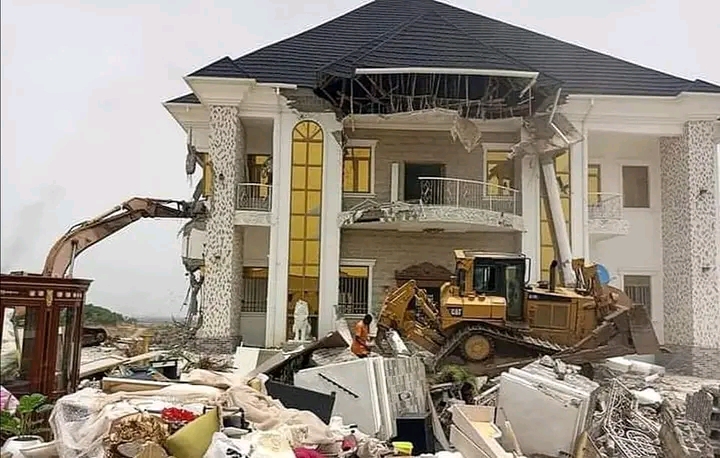 Prince Joseph Kpokpogri, the estranged lover of controversial Nollywood actress, Tonto Dikeh, has dragged the Federal Capital Territory minister and other agencies to court to claim over N2 billion in damages.

In May, Hotmedia.ng reported that a multi-million naira mansion belonging to Prince Kpokpogri was demolished by the Federal Capital Territory Administration (FCTA) in Abuja.

It was gathered that the mansion, which is in the Asokoro area, was invaded by officials of the FCT Administration with a bulldozer which began to demolish the building.
Speaking with SaharaReporters, the owner of the building, Kpokpogri expressed shock, saying he was not informed prior to the demolition by the officials. He described the demolition as illegal.

Meanwhile, in a video obtained by the media, Kpokpogri’s lawyer, Mike Ozekhome (SAN), told journalists on Thursday that his client has approached the court to claim over N2 billion in damages for the illegal demolition of his client’s house by Abuja authorities.

He stated that the case has been adjourned till June 15, 2022, for the continuation of hearing the motions filed before the court.

“Justice this time will not allow them to go scot-free. That was why we came before this honourable court, filing two motions, one for an interlocutory injunction; one, ex parte for an interim injunction.

“Through this ex parte motion, we are asking the court to restrain them, make an ex parte order to restrain all the agencies involved in this ugly incident from coming back to complete their demolition work.

“This young man [Kpokpogri] with his family was thrown into the street. Imagine a landlord becoming a tenant in his own country without a just cause. The case has been adjourned to the 15th of July for hearing of the motion. We are claiming over N2 billion,” the senior advocate disclosed.