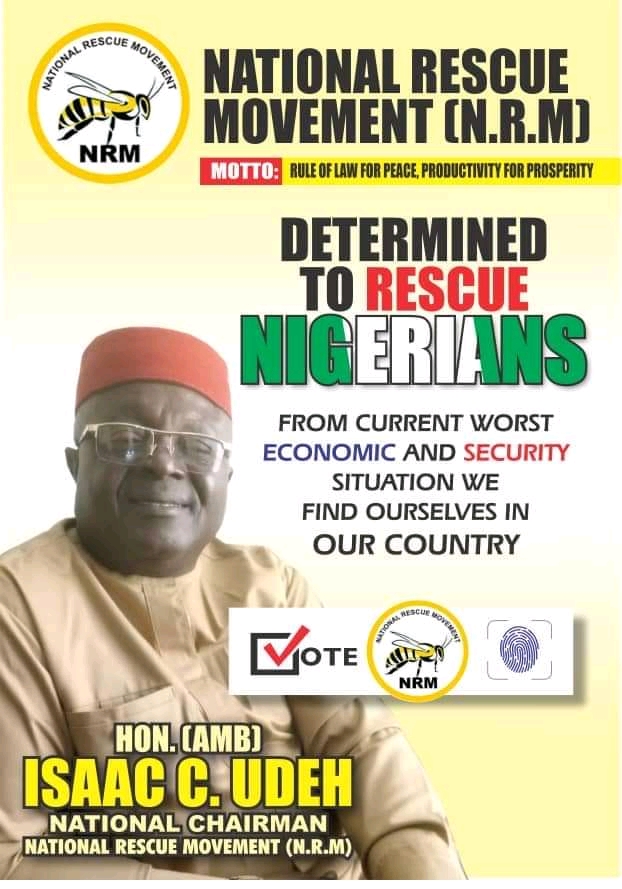 Crime rate among Nigerian youth has assumed a worrisome dimension, today. If the current trajectory in crime rate among these youths is allowed to continue unabatedly, the future of Nigeria and its productive army is clearly on the path of destruction.

The National Chairman of National Rescue Movement, NRM made this statement while delivering speech to the coalition of Nigerian youth who paid him a solidarity visit in his office

“The problem of Nigeria today is that the rich men and political parties that had governed this country from the beginning to day, they have not handle the economy well to create jobs. Ambassador Ude stated.

If the past and present administrations had provided good economy through massive jobs creation in a good manner, by now we will have few criminals in Nigeria” He noted that the rich men have mismanaged the resources that are supposed to be for the benefit of the common man. “If the rich didn’t allow the poor to sleep, so also the poor will not allow the rich to sleep, both will be awake,” he cautioned.

According to the Chairman, National Rescue Movement, NRM government and administration will focus on wealth creation by creating jobs for the unemployed youths, so as to eradicate social vices and youth restiveness in the country.

Nigeria’s booming population requires more and better Jobs to reduce crimes and poverty. With over 200 million people and high rate of population growth. The rise of Crime, poverty and insecurity in Nigeria. There is needs to create 70 to 80 million additional jobs between 2023 and 2033. To reduce poverty, eradicate Crimes and promote more inclusiveness, these jobs need to be more productive and provide higher incomes than the country’s jobs today. Amb Ude stressed.

According to NRM Chairman, Amb Ude, here are the job creation strategies:

Growing unemployment especially among the young has been one of the worst consequences of the current economic and security crisis Nigeria is facing. Youth unemployment has risen to an unprecedented high in the country. National Rescue Movement, NRM focus will be on jobs creation.

The Strategies will be :

Tackling unemployment and the social consequences of the crisis

Building and establishing of industries and factories both local and foreign direct investment.

Local content refers to a set of actions, local recruitment, training, purchases of local goods and services – that are designed to develop the industrial infrastructure and skills of the people in the country that host businesses or projects.

Local content is generally measured as a percentage of investment, hours worked, the equipment manufactured or the number of jobs created. Increasing the local content of projects is a way of enhancing skills and building industrial capacity in host countries. This in turn spurs economic and social growth.

Industry players, especially the foreign ones, are expected to align their local content programmes with the project’s technical characteristics and local industry. They are based on assessments of the industrial context, available skills and stakeholder expectations to identify and develop local resources. Ambassador Ude, explained.

Well, Nigeria were far more productive in 1980 than we are today.

In 1980 the key reasons for economic growth were as follows:

Steyr in Bauchi produced our Agricultural tractors. And it was not just Assembly, we were producing many of the components:

Exide in Ibadan produced the batteries, not just for Nigeria but for the entire West Africa.

IsoGlass and TSG in Ibadan produced the windshields.

Ferrodo in Ibadan produced the brake pads and discs

Dunlop produced Tyres  in Lagos and Mitchelin Tyres were produced in Port Harcourt. And I mean tyres produced from rubber plantations located in Ogun, Bendel and Rivers State.

Nigerians were listening to Radio and watching television sets assembled in Ibadan by Sanyo.

We were using refrigerators, freezers and Airconditioners produced by Thermocool and Debo.

Nigerians were putting on clothes produced from the UNTL Textile Mills in Kaduna and Chellarams in Lagos. They were Not from imported cotton but from cotton grown in Nigeria.

Our water was running through pipes produced by Kwalipipe in Kano and Duraplast in Lagos .

Our toilets were fitted with WC produced in Kano and Abeokuta.

Nigerians were cooking with LPG gas stored inside gas cylinders produced at the NGC factory in Ibadan.

Our electricity was flowing through cables produced by the Nigerian Wire and Cable, Ibadan; NOCACO in Kaduna and Kablemetal in Lagos and Port Harcourt.

Nigeria had Bata and Lennards Stores producing the shoes we were putting on. The shoes were not from imported leather but from locally tanned leather in Kaduna.

Most of the foods we ate were grown or produced in Nigeria.

Nigeria were producing all of the above and many more in 1980.

There lies the source of the terrible exchange rate we are experiencing today and adverse crime rates in the country and youth unemployment.

What are we producing now?

What role are our so- called Leaders/ Politicians of today playing?

2023: Nigeria on the match again, our dear Politicians needs to answers the questions above.