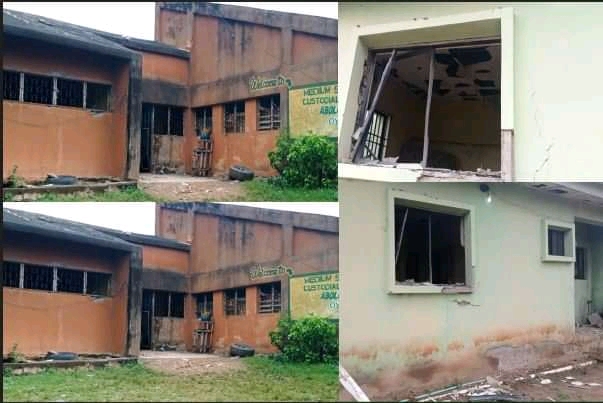 Suspected gunmen have attacked one of the facilities of the Nigeria Correctional Service (NCS), in Oyo State.

According to the report reaching Hotmedia.ng desk, the facility, christened Abolongo correctional facility, was attacked by the gunmen on Friday night

About a thousand prisoners have reportedly escaped from the Abolongo prison in Oyo town after some gunmen bomb the correctional centre and freed all inmates.

Hotmedia.ng learnt that the gunmen set all the prisoners at the facility free during the attack. The inmates numbering about 1000

Hotmedia.ng gathered on Saturday that the attackers stormed the facility at about 10pm on Friday.

It was gathered that the attackers used grenades to gain access and set prisoners free.

According to the report from source, He said two soldiers and two Amotekun corps died in the gun duel with the attackers, who later detonated a dynamite to break the prison wall to gain access.

However, the source added that security has been beefed up in Oyo and environs on Saturday morning, a development leading to the re-arrest of some of the inmates who fled.

As at the time of this report, the Oyo State Police Command was yet to release an official statement to ascertain the actual number of the escapees from the correctional facility.

Spokesman for the Nigerian Correctional Service (NCS) in the state, Olanrewaju Anjorin confirmed the bomb attack on Saturday.

Anjorin in a telephone conversation said that the senior officers of the agency were on their way to access the level of damage.

He said, “Yes. It has been confirmed that the attack actually happened.

“And right now, the comptroller of Nigerian Correctional Service (NCS) and other top officers are assessing the situation.

“But, I can confirm to you that the incident actually happened.”